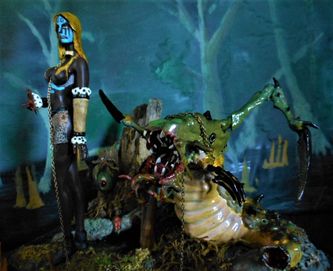 The lady in question with a minion (or is it?) in tow.

I've been a HP Lovecraft fan ever since this ten year old summer camper was told a ghost story about a guy trapped inside a spooky crypt with shoddy coffins of his own making and the restless souls that laid within. Although, at the time, I didn't know it was Lovecraft behind the tale, I later discovered who he was while during my mid to late teens and have been an ardent fan ever since.

I'm also a big fan of the artists that share their visions of that eldritch (that's a Lovecraft word if there ever was one) storyteller's work in paint, clay or film.

I, too, have made some attempts to display his visions, though hardly approaching the caliber of others but I've given it the old college try as displayed in the Lovecraft section of this site. What I present to you now is my latest attempt which I call “Cthulhu Priestess with Servitor”.

The female figure is a roughly 1/12 scale model that I had purchased on eBay several years ago. She may look familiar because she is, my having used this resin kit for some of other dioramas. See “The Ladies” area on the site for more examples of her. 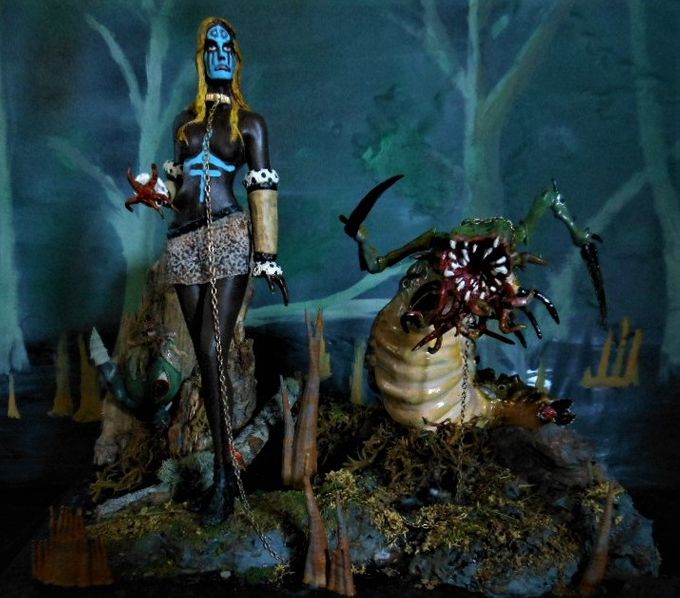 Addendum: This diorama won a "Merit" award at the 2022 Wonderfest.

In any case. I decided to make her mulatto in keeping with the part of Lovecraft's short story “The Call Of Cthulhu” where some of it takes place in the bayou country involving what initially appears to be voodoo worship but proves to be something significantly worse. Though my scene has no actual occurrence in the story itself, I wanted to create a sense of the madness the Cthulhu cult evokes along with appearances from less significant beings associated with the Great Old Ones.

Her blue face paint has a simple Cthulhu like countenance draped over her head implying a total servitude to Cthulhu although the golden collar and chain tied to the nearby servitor suggest that it may not be totally voluntary. Her deformed, starfish like right hand (my addition) shows that she is in a state of metamorphosis which will probably get much worse in the future.

The servitor is a build up of a very nice vinyl creature kit from Reaper Bones called Mashaaf, a sculpt by Kevin Williams based on a design by Talin. Though not specifically tied to the Cthulhu Mythos, its appearance certainly suggests as much. Ever the tinkerer, I added several more eyes randomly along its slimy length. A final touch for the pair (which I have used elsewhere) was to add a golden chain about the girl's neck linking her to the repulsive being at her side so that she couldn't escape if she had a mind to.

The base is my old stand by of a 8” x 11” wooden plaque I picked up at the crafts store. I wanted to show a world that had already succumbed to Cthulhu's dominion (the stars were, at last, right) and the ecological havoc that event would incur.

I was going for a hellscape in a bayou setting with lots of dead foliage and polluted water. I applied MANY coats of gloss black paint from a rattle can to give a 'dead' water effect. I then built up the dry land areas with SculptaMold, working it around the base of the servitor to tie it into the scene. As the SculptaMold beginning to set, I removed the servitor to get it out of the way and make it easier to work on the base. This left behind a depression that I could reposition the servitor once the scenery was completed. 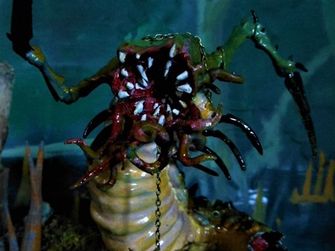 Close up of the Servitor, a very nice kit from Reaper Bones. Click for a larger image. 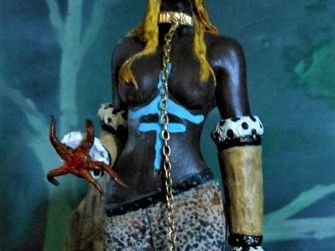 Close up of the Priestess. It's a resin kit I picked up on eBay several years ago and just got around to having her earn her keep. Click for a larger image.

I had a splintered branch in my wood pile that had a blasted appearance to it so I cut off a roughly six inch long piece and mounted it at the rear of the scene. I then applied several coats of Gallery Glass' Crystal Clear liquid on top of the gloss black areas which will give a nice ripple effect. This stuff is pretty thick so you have more control of its placement because it doesn't flow all over the place like other water effect products. It starts out white but once dry, it will be clear. The down side is that you have to keep the layers fairly thin or they will take forever to harden and may look milky for a LONG time. An unexpected benefit of this material is that it will tend to produce bubbles if you apply it vigorously which what I wanted on the water's surface for this particular scene.

While the Gallery Glass was setting, I added some cypress like pieces of plastic that in another lifetime were supports for a 3D printer project of mine several months ago (NEVER throw anything away!).

After everything dried and/or cured, I applied several different washes of browns and grays to stain the land areas. I wasn't too concerned about how this looked (aside from getting at all the white areas) since most of it would be covered with dead vegetation and vines later on.

I had several types of ground foam which I applied to the land areas along with tea (yes, tea), some odd looking debris from a tree that grows in front of my house and peat moss were what I used to cover the base. I applied these materials here and there and, after I prewet them with an 50/50 alcohol and water solution using an eye dropper, I followed with a dilute PVA glue to secure everything to the stained SculptaMold rocks. The prewetting step is important because the PVA glue solution will just bead up and not soak into the ground foam very well.

The odd eye ball/seed pod thing in the back growing out of the dead tree stump is another extraction from my junk box. It was a 3D print from another project that I decided not to use at the time. I added the extra eye thing growing out of the eye pod to further support the concept that this ain't Kansas anymore feel for the scene. I think it worked. 2/16/2020 NFS 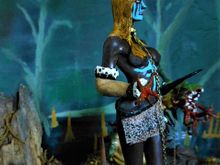 Side shot showing my eye thing a little better. Click for a larger image. 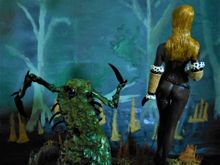 Backside of the diorama. Click for a larger image. 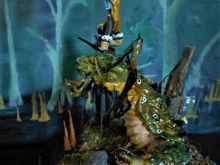 Another shot from the other side. Click for a larger image. 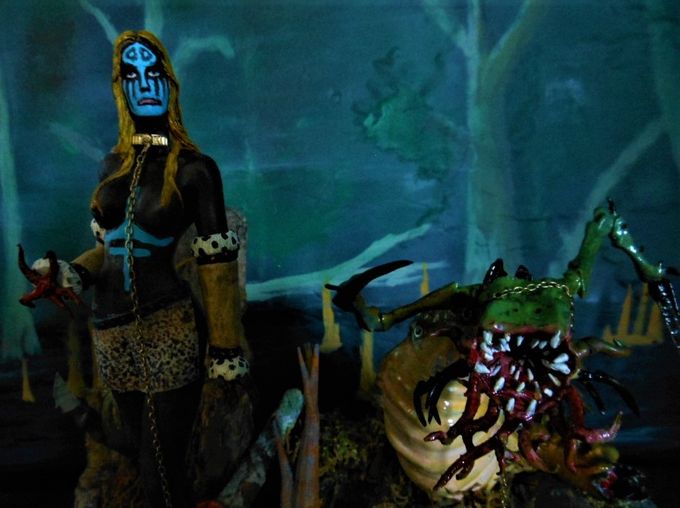 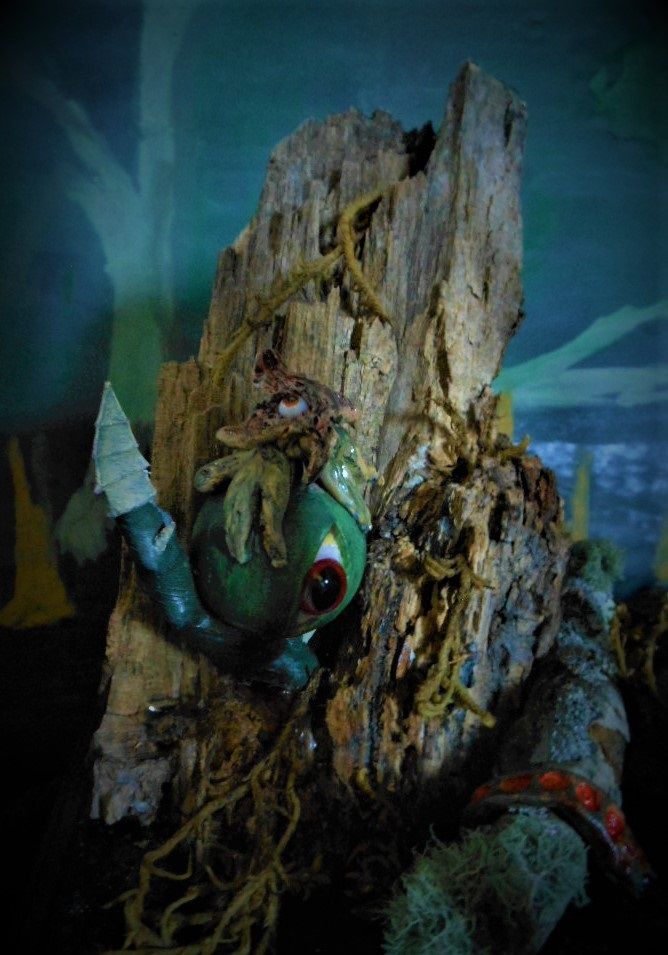 The "eyeball critter" keeping an eye on things.