Shoggoth - "At The Mountains Of Madness" 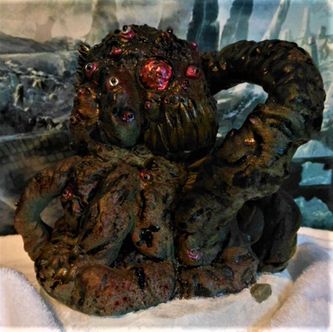 Here's another very well done 3D print from ParagonStar of one of HP Lovecraft's more infamous creations, the shape shifting shoggoth. It first appeared in story form in “At The Mountains Of Madness”, probably Lovecraft's best Cthulhu Mythos work and anticipated (though as yet to be realized) motion picture. These creatures have appeared in numerous stories and are commonly represented in various gaming venues. An ever growing list of some of these games can be found in this Wikipedia article which also describes this monster more fully: https://en.wikipedia.org/wiki/Shoggoth

This print is the largest that Paragon Star offers and about the same size as the Dunwich Horror (8” tall and 8” in diameter) that I described in another article that you can find in the Lovecraft area.

The detail is really remarkable considering it is a 3D print which, oddly, posed something of a problem. The shape shifting creatures are often described as being oily black and iridescent which doesn't translate well when painting a static figure because the detail can be lost in the coloration. What I ended up doing was painting it with a mixture of dark green and tan from rattle cans. Before the paint fully dried, I can back with clear red, blue and green (also from rattle cans) highlighting the numerous protrusions and tentacles which abound on this figure. I kept at this numerous times until finally got the look I was aiming for.

Next came on what color to paint the 32 eyes and eight mouths. The eyes were of various sizes and give the appearance of morphing back into the body or, conversely, just emerging. Ditto on the mouths. I initially was going to go with typical eye coloration with white sclera and some tint for the iris but, after a few test eyes, I decided this just didn't fit the overall color scheme.

I finally decided on a 50/50 mix of iridescent blue and red which gave me a plum iridescent sclera. The iris' were from my glass doll eye stash which I doubled on some of the larger orbs. This is an actual eye deformity called polycona. I used 3 to 5mm eyes with clear irises which I back painted silver. Once all the eyes were in place, I applied two applications of Gallery Glass Crystal clear on the whole eye to give them more relief which resulted in a nice bulging eye effect. 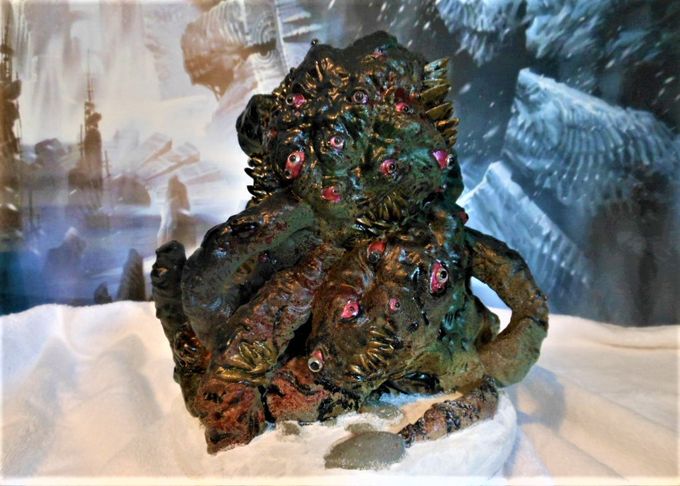 Since the shoggoth figure is one piece with the base attached, I decided to have the creature in a snow field since it was first encountered in the frigid Antarctica. Examination of the base revealed what were several large stones embedded in the base which I painted a flat medium gray with inexpensive crafts paint. What I had determined was actually the “snow” part of the base, I painted flat white, again using craft paint. Once these two painted components had dried, I coated the snow areas with a thick layer of clear Elmer\s glue followed by a generous dusting of Woodland Scenics Snow (SN140). Once the glue hardened, I tapped the base to remove any lose snow and touch up any bare spots.

The final step was to come up with a background relating to the story. I did a few Google searches such as “Antarctica mountains”, “snow covered mountains' & “at the mountains of madness”. These three searches resulted in dozens of images of which I downloaded three. I cleaned up the selections using the Windows Paint and Photo Editor program and then uploaded them to Vistaprint so I could get 1.7' x 3' vinyl banners made. There was a sale going on so the three banners cost me just under $33 which included shipping. I often use Vistaprint for my backgrounds since they make a nice product, the quality is great and shipping is relatively fast. Though they are based in the Netherlands, I believe they have shops in New York and elsewhere. I displayed the three backgounds I used at the bottom of the page if you wish a closer look. 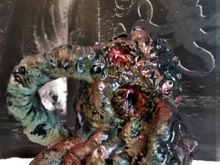 Click for a larger image. Note the different backgrounds. This one had a huge wall with bas relief carvings of the Elder Things discovered at the mountains of madness in Antarctica. 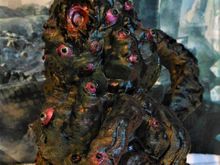 Click for a larger image. This background is a nice panoramic view of the Elder Things city. 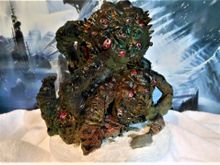 Click for a larger image. This background shows some great structure in the Elder Things city.

This is the second of the ParagonStar “Lovecraft” line I have built and I was very pleased with their quality. I found one very minor split in the print which is not unusual for that particular process and it was easily repaired with a dab of acetone and a clamp. The toughest part was determining the color palette but there many reference images on Google one could use as a guide. I'm looking forward to my next Lovecraftian horror project. 6/17/20

A brief video showing the monstrosity since its ever changing form is almost impossible to capture in a single image. 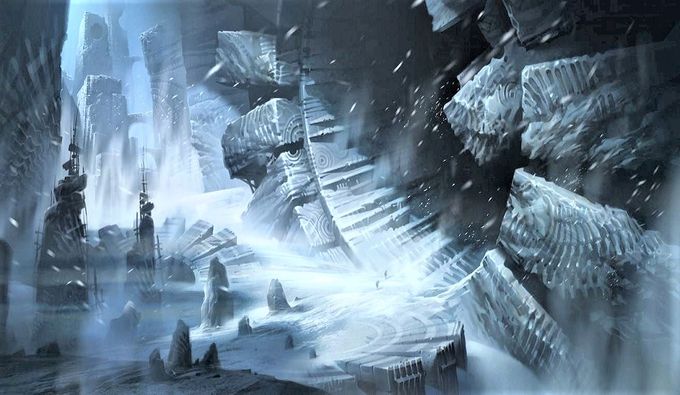 One of three background plates I used for the Shoggoth scene.. If you look carefully, you can see two explorers entering the huge opening. 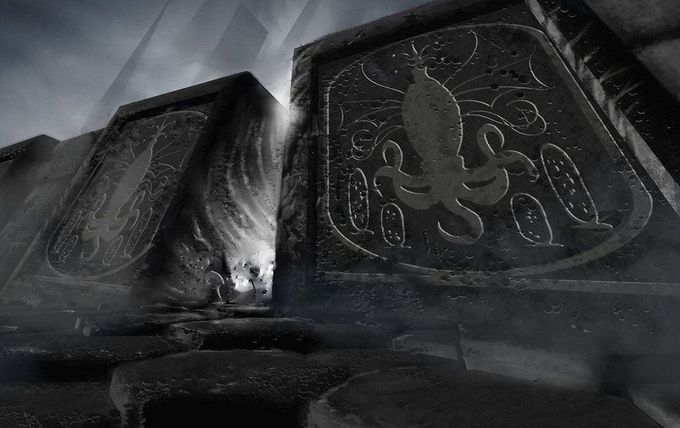 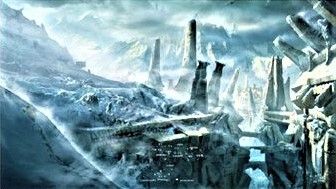