The Chthonians Are On Main Street 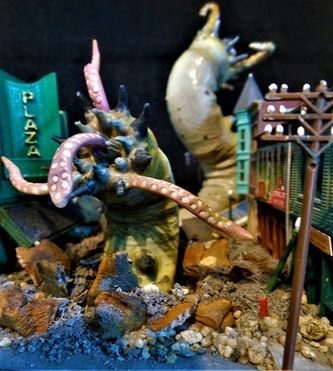 As some of you may know, I am a big fan on the Cthulhu Mythos and will attempt to depict versions of some of the stories in as many forms as possible, be it in kit or diorama format. To my knowledge, there are roughly twenty Mythos “official” kits that have appeared over the years which, unfortunately, focus on variations of Cthulhu and not much else. So, in the interest of diversity, I have opted to attempt to display some lesser known creature from the Mythos, hence this diorama.

As the title suggests, the focal point is of a Chthonian which first appeared in Brain Lumley's terrific short story “Cement Surroundings”. Without disclosing too much, the story involves an elderly scientist that inadvertently incurs the wrath of said Chthonian(s) which are huge worm like creatures that live inside the Earth's mantle. Needless to say, things don't go well as the tale progresses. Although the creature never makes an appearance in the story per se, I highly recommended the read and which is one of the better additions to the Lovecraft zoology in my view. 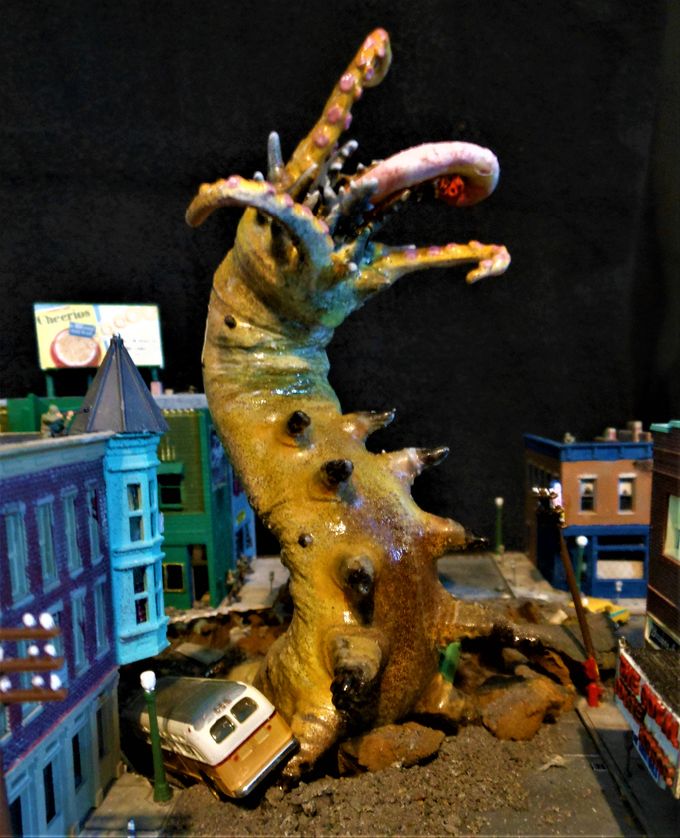 The adult Chthonian at the bus stop. No lines, no waiting. 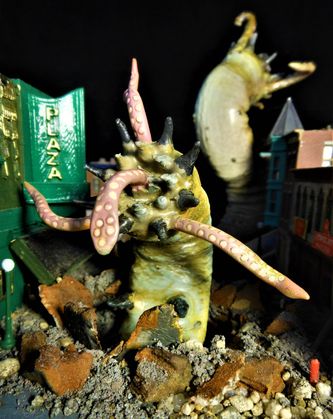 A close up of "Junior". Like Dad, the main body was 3D printed but the mouth parts were hand sculpted. Click for a larger image.

The first take of the scene that came to mind was inspired by the cover art of the 1961 premier issue of “The Fantastic Four” which has a massive ogre like creature emerging from beneath a city street. The bad guy in this tale was The Mole Man who had somehow gathered dozens of gigantic subterranean monsters to do his bidding which the FF intend to thwart. Yes, I owned this comic in the day but I'm a bit rusty on the details of the story since my Mom chucked it in a cleaning frenzy of my room decades ago. :SIGH:

The base is a shadow box frame roughly two inches deep into which I placed two layers of 1” thick insulation foam board. The foam board was essential since I intended to gouge it out where the two monsters were to emerge. I had initially planned on having just one Chthonian in the scene but decided that two would be more interesting. I saved the chunks of excavated foam board to use as some of the debris scattered around the holes.

The buildings were a straight forward affair in terms of their construction and painting but I added more detail to them such as air conditioners, drapes and shades in the windows and roof clutter. I added street detail such as telephone poles, fire hydrants, street lights, mail boxes, parking meters and automobiles. 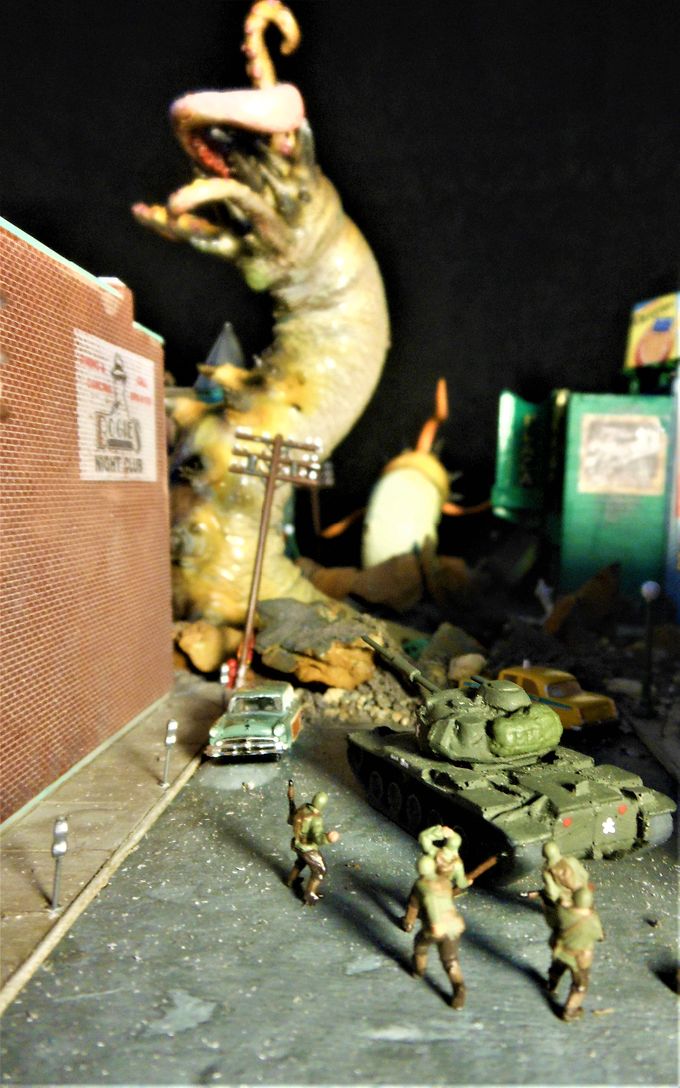 A tank and a squad of soldiers trying to get the drop on the big fella. There are many soldiers scattered throughout the diorama but they're hard to see because of their small scale. Click for a larger image. 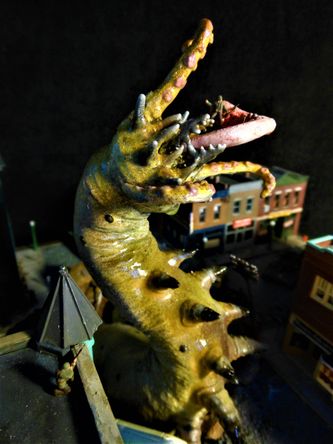 An unlucky soldier about to get consumed. Click for a larger image.

Though the worms printed out very well, they needed more pizzazz (in my opinion) so I added latex and hand sculpted tentacles and mouth parts like their brethren, the bholes, the other members of the subterranean Lovecraft menagerie. As creatures whose existence is almost exclusively under ground, I felt that a pale, grub like coloration was in order so I gathered as many grub and annelid images I could get from the Goggle machine to use a guide which resulted in the images before you.

I spent some time detailing the caved in street sections with bent and severed pipes, burst water lines and the like but this wasn't really that necessary because most of it was hidden by the monsters themselves but it was good practice and really didn't take that long.

I acquired a number of N scale US military figures which I scattered about the scene with the obligatory tanks firing ineffective rounds at the menacing creatures. For an added point of interest, I placed a US Army attack helicopter hovering over the city streets as it blasts a Sidewinder rocket into its gut which is just a blob of insulation foam painted to look like an explosion. I made the effect removable so I could have the adult Chthonian with or without it as it is about to eat an unlucky soldier. Look closely at the pictures and you can see him stuck to the 'tongue' tentacle of the huge creature. 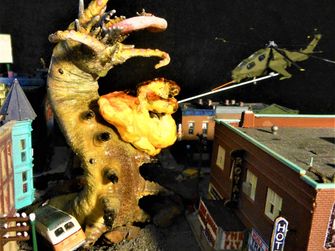 Alternate shot of the Chthonian getting hit by a Sidewinder missile from the chopper. Click for a larger image. 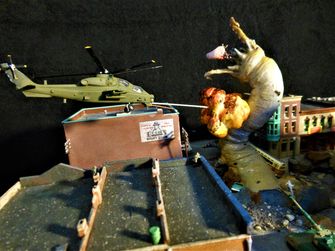 Same scene but from a different angle. Click for a larger image.

This diorama was fun to build although the hardest part was constructing the N scale helicopter, believe it or not (too many small parts and failing eye sight had a hand in it). Anyway, I think it came out pretty well and it will hold a special place with my other original diorama scenes. 8/6/2021 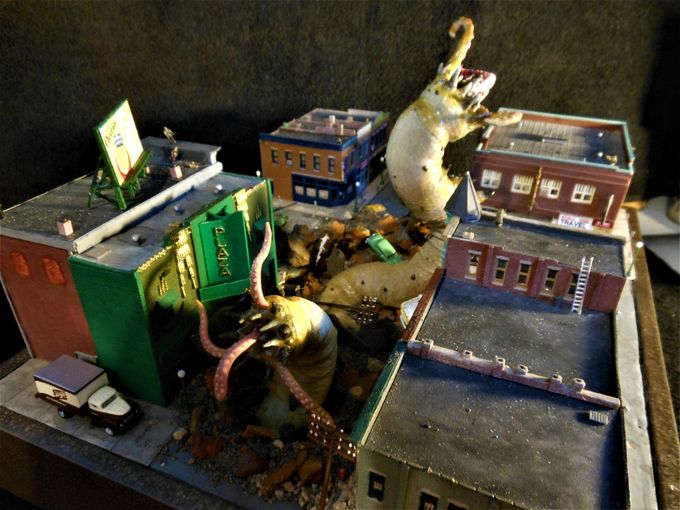 A "God" shot of the whole diorama.