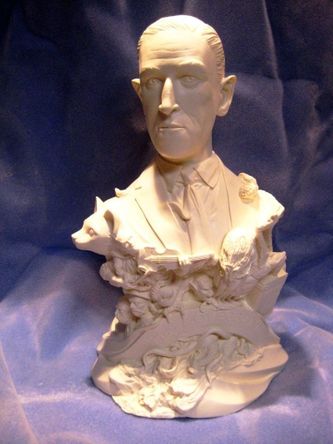 Photo of the unpainted bust.

Here is another tribute bust from Earthbound Studios along the same lines as the Frank Frazetta bust you can find elsewhere on this site. The concept is pretty much the same in that there are about dozen figures festooned around the base of HPL himself, displaying most of the characters and creatures he had created in his writings.

The cast was pretty clean although there was an annoying seam line running along the upper surface of it that were on very exposed areas of the bust. It cleaned up pretty well but not without little effort. This roughly fifteen inch tall bust had two parts, the primary one being the bust itself along with a roughly 3/4” long horn that you have to glue to the head of “The Unnameable” creature on the front. This small part was necessary because it would have been almost impossible to cast everything in one piece. 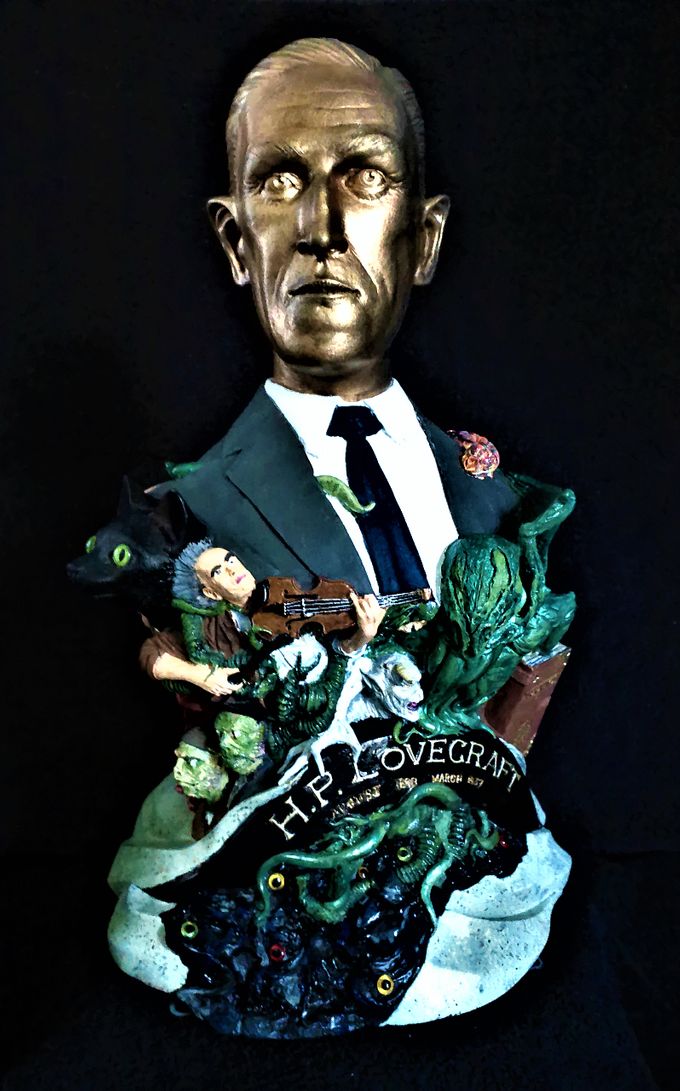 The very nice sculpt was by Mat Brouillard and was laid out very well. If I had one complaint about any of it, it would be that the 90% of the images were based on cinematic representations of Lovecraft's characters and not his writings. If one purchased this bust having only been familiar with Lovecraft's written work, I think he or she would have been hard pressed to figure out what anything related to in that context.

Here is a list of what I could identify as they related to Lovecraft's stories: The Call Of Cthulhu (obviously), The Music Of Eric Zahn, The Cats Of Ulthar, Herbert West: Re-Animator, From Beyond, Pickman's Model, The Shadow Over Innsmouth, The Unnameable and At The Mountains Of Madness. Some of these are best guesses such as Pickman's Model or At The Mountains Of Madness since I could see an artist's palette or what seemed to be a shoggoth that are related to those stories. The cloaked cultists are still a mystery to me although I suppose they could be a broader reference to a number of his tales.

Still, what is there captures the cinematic versions extremely well, the most obvious being that of Jeffrey Combs in his “Re-animator” and “From Beyond” roles. I kinda missed not seeing Barbara Crampton represented anywhere though. 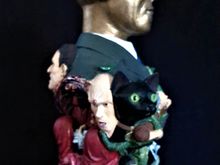 Right side of the bust. Click for a larger image. 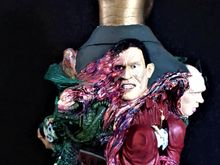 Rear of the bust. Click for a larger image. 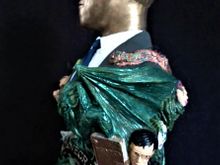 Left side of the bust. Click for a larger image.

As is my nature, I just HAD to add eyes and this build was no exception. I drilled out the eyes on Lovecraft's cat and substituted new ones from my stash along with half a dozen on the shoggoth at the base. The lenses in Herbert West's glasses are actually a two part clear epoxy I poured into the frames.

I mounted the bust on a six inch diameter turntable assembly that I purchased at Home Depot for about five bucks. This allowed me to display the piece without handling it to see the all the sides.

Like the Frazetta bust, this was as bear to paint with all the figures and objects mashed up against one another. It was probably my most difficult paint job I have attempted thus far. Getting clean lines between the disparate objects was a real chore. I used Run-N-Buff antique gold for the Lovecraft part of the bust and hand painted the remaining items with craft paints and few Model Masters thrown in for good measure. This was about a three week project, assuming three hours a day, everyday (I'm retired) which comes to roughly 63 hours of total effort. So if you feel up to it and looking for a challenge in the painting department, this might be the project for you. 10/4/21

A brief video of the bust rotating to see all its roughly twelve elements that are based on the works of Howard Phillips Lovecraft.