Kothoga Version #2 from "The Relic" 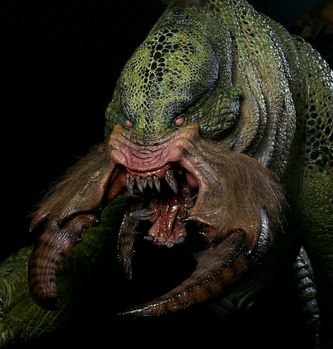 ~SOLD!~ This is my second go at building this fearsome creature in vinyl kit form. My first was the 1/12 scale Pegasus Hobbies version which is a very nice kit and retails for around $32 plus shipping. This particular kit is from an apparent merger of Revell & Monogram and is a bit smaller, possibly 1/15 scale and retails for $35. The pose is more menacing as if the monster has heard something and is turning to investigate. The cast quality is average. All you get with this kit (despite its higher price tag) is the figure.

As luck would have it, I was repairing and repositioning a T-Rex model that Glencoe had put out some years ago when I happened upon the idea of typical museum display setting of the T-Rex with the kothoga creature lurking nearby. Since most of the scenes involving this monster take place in a museum so I decided that would be the most logical to construct.

I went on Google to see if I could find an interior photograph of a museum. There were dozens. I settled on one that matched the movie version pretty well aside from two women standing in the background. I erased the females using the “spot fix” feature in my Windows 10 photo editor and uploaded it to Vistaprint to print it on a 1.7' x 3' vinyl banner which cost me about $12 (on sale shipping inluded). 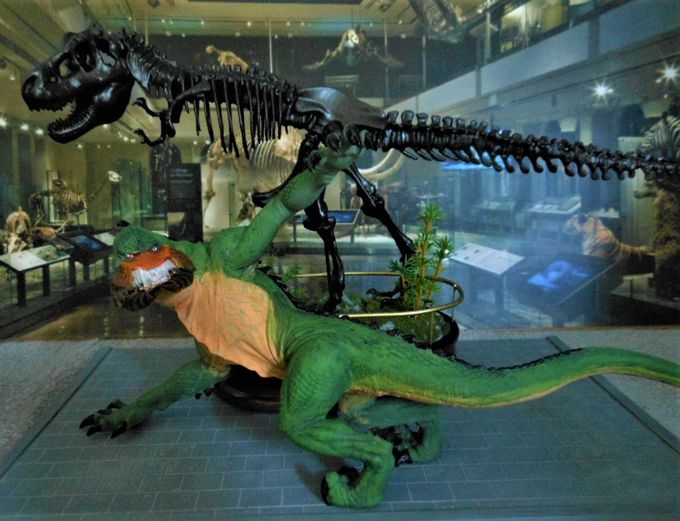 Sorta looks like a Teenage Mutant Ninga Turtle, doesn't it?

The T-Rex display base turned out to be the most complicated part of the scene. The oval base was procured from my scrap box and once was the base for a Brachiosaurus display skull from the Dinosaur Store. I shot several staples into the upper surface to act as anchors for the layer of Sculpt-mold I would apply later. I drilled six 1/64” holes around the perimeter of the base were stanchions for the brass hand rail that would come later. I also mounted a six inch long piece of coat hanger wire in the center of the base that would suspend the T-Rex skeleton.

I made up a small batch of Sculpt-mold which I applied to the top of the base and formed it into a rough rocky surface. Once this cured, I painted it a flat medium gray and dusted it with Woodland Scenics Blended Turf. Delving into my plastic plant stash, I found some bamboo and assorted plants to mount on the finished base to give it a little more interest.

Using nails from my electric nail gun, I placed them in the six holes I had drilled previously and secured them with AC glue. I had some 1/8” diameter aluminum wire which I bent around the outside of the base to get the right curvature. Carefully trimming and measuring multiple times, I had a nice oval hoop that fit perfectly around the nails. I had some small brass tubing and used this with AC glue to help secure the ends of the hoop and hide the seam. I then painted the hoop and stanchions with brass colored enamel paint. 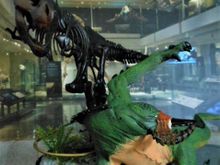 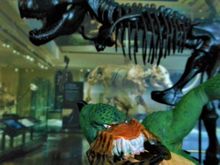 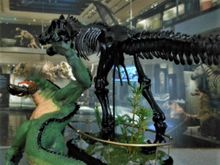 The Glencoe T-Rex was an old kit that had fallen off the shelf and broke into several pieces. I had spent a lot of time on this kit when I first built it, drilling out the skull and changing the stance to reflect current thinking on how this animal moved, eschewing the tail dragging pose that was originally assumed in the paleontology community. I also carefully heated the tail end sections with a heat gun to soften the plastic so I could get a nice curl at the end of the tail, the purpose being to add some visual interest as well as shorten this fairly long model by about two inches. Once the repairs and adjustments were complete, I drilled a vertical hole beneath the hip bones for the mounting wire and painted the skeleton a hammered brass color from a rattle can.

The base platform was a piece of 9” x 15” 3/4” plywood on which I glued a sheet of N Scale Architect O gauge Ceramic Tiles that I had painted a medium gloss gray. I applied a dilute solution of white acrylic paint evenly spread over the surface which flowed into the seams to look like mortar, dabbing any excess away with a paper towel. I applied this wash twice letting the layers fully dry between coats until I was happy with appearance. I finished the base off with a plastic trim of Plastruct 1/4” L stock on the front and sides and painted the exposed plywood flat black.

There as several color variations for the Kothoga creature to choose from so I painted it various shades of dark and medium greens on the upper surfaces and flesh for the belly and tail underside. Using a toothpick, I applied a dilute solution of dark blue to highlight the raised veins on the underbelly and then painted the back frill and random raised skin details glossy black. I went with orange irises for the eyes,

As I said, there wasn't much to this kit so in some ways it allowed me to use my imagination to make a hopefully more interesting scene than just the monster in a menacing stance. I think I succeeded. 6/25/20  SOLD!