The Hell Spawn - A OEG original 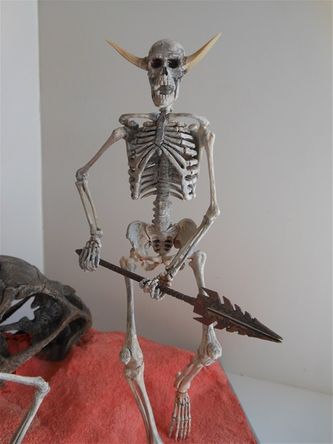 This is a original build of mine that I made several years ago but neglected to post it on this web page for some reason. I was relocating my dioramas and kits into a larger room when I came across “the Hell Spawn” so I thought I'd do a brief write up on its construction as best as I can recall..

I'm a big fan of Ray Harryhausen's work and his most iconic would be the skeleton fight with Jason and his men sequence at the conclusion of 1963's “Jason And The Argonauts”.

I managed to find some very nice articulated skeleton figures (not sure where, eBay maybe) that stood about nine inches tall. Adding more of my own stuff, I CA glued several prehistoric shark teeth (yes, you read it right) to their heads as horns. After cutting one skeleton in half so it seems to be emerging from the earth, I painted them with a flat light gray all over followed with two dilute washed of dark brown and black to bring out the detail and suggest great age, I did the same with the pseudo dinosaur skeleton 'pet' which I also found on eBay.

Once I posed the figures, and secured their positions with CA glue, I added fighting gear, some of which were from some weird key chains I purchased on eBay, where else?

The large skull in the background is of a Brachiosaurus from a display that I managed to break when it hit the floor at 32ft per second squared. 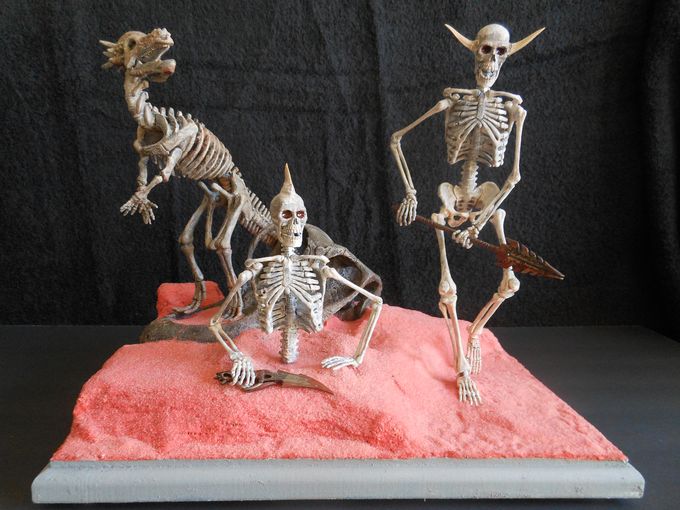 The base is a 9” x 11” wooden plaque which I like to use in this type of scene. It provides a nice sturdy base along with solid under layer I can attach stand pins and the like. I built up areas to resemble low sand dunes using crumpled up newspaper and plaster cloth. Once this set over night, I painted it a medium pink color to hide any white from the plaster. I then applied a very thick coating of PVA glue which I liberally coated with coral colored sand. I then misted it with a 50/50 mix of water and isopropanol (rubbing alcohol), soaking the sand well so the PVA can wick up and firmly secure the sand. I should mention that I placed the Brachiosaurus skull BEFORE adding the sand so it would have a nice half buried appearance.

And there you have it. This project took about four hours not counting drying times between steps. The process is fairly generic so you can use it with just about type of scene you fancy. 6/30/20 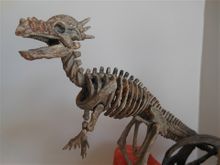 I didn't glue the pseudo dino skull so that I could change its position from time to time. Click for a larger image, 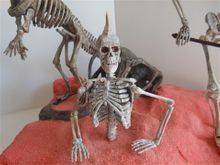 Close up of the emerging Hell Spawn warrior. Click for a larger image, 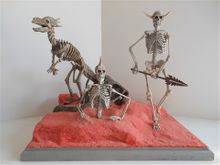