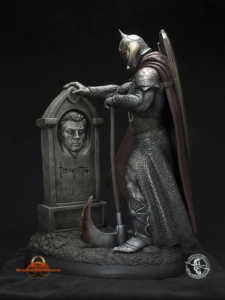 The box art for this figure.

SOLD! This is a very nicely detailed and large cast resin statue of Frank Frazetta's iconic Death Dealer shows a scene of the titular character paying homage at it's creator's grave. The sixteen inch (!!!) tall poly stone version can be purchased all ready painted but I manged to pick up an unpainted version on eBay. Sculpted by Barsom Manashian, the eight piece “kit” requires absolutely no clean up and goes together with cast in magnets so no adhesives are necessary for its assembly.

I went with something of a departure on coloring this build by using Rub'n'Buff oils and standard acrylics. The chain mail, helmet, gantlets and metal boots almost cried out for the Rub n' Buff technique which looks great in this application. I suppose I could have done the whole thing in Rub n' Buff but I opted to mix the two mediums for a bit more variety.

When using Rub n' Buff, I give the object a base coat of flat black primer which I let cure over night. I then put a small dab of whatever Rub n' Buff color I decide to use (pewter in the case of the Death Dealer armor) on a soft cloth and, well, rub and buff. Avoid putting a large blob of the Rub n' Buff material on the working surface since you just want to burnish the high points of the object, allowing the low areas to enhance the overall appearance. I suggest a dry run on a contoured piece of smooth plastic or wood to get the hang of it. 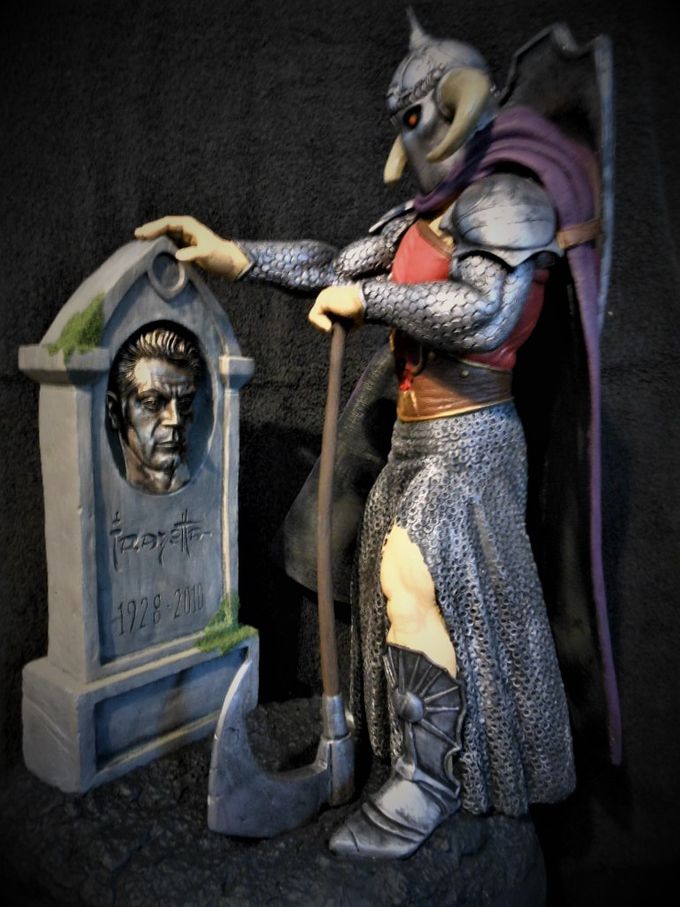 To start with, I base coated everything with flat black paint from a rattle can. As I said earlier, I used a mixed media approach with this project. For an example, I painted the gravestone as I normally would with acrylics to give it a weathered appearance but left the bas relief of Frank Frazetta's face alone. Once the acrylics had dried, I came back with a small worn brush with “Old Gold” Rub n' Buff by lightly applying it on the raised surfaces on the face. I then used a soft cloth and gently rubbed the material so that it highlighted the hair, cheeks, nose, chin etc. until I was happy with the appearance.

I did the same with the chain mail and other armor being careful not to overdo it. Think of it as a highlighting step as opposed to “painting” to get the right approach. 7/20/20  SOLD! 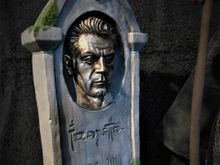 Detail shot of the headstone. Click for a larger image. 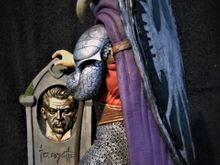 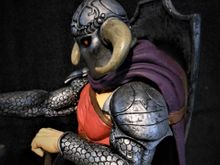 Detail shot of the Death Dealer. Click for a larger image.