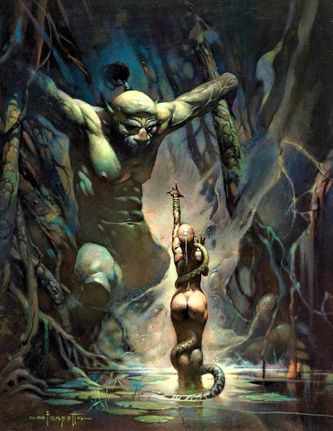 The painting by Frank Frazetta on which this kit is based,

Here's another kit from Resin In Motion based on a painting by Frank Frazetta called “Swamp Demon”. The sculpt is by Mike Maddi which copies the scene very well although I think the demon is a little smaller than what is displayed in Frazetta's painting but that just might be me. In any case, it is a fine piece of work and I can't begin to imagine how one creates a 3D representation of a 2D subject.

Accolades aside, I have to say I was somewhat disappointed in the quality of this kit which I would say is average. There were no instructions which would have helped immensely in placing the trees and figures. Fortunately, I got a hold of some photos online of the finished kit which helped a lot in this regard. To be fair, I should mention that I purchased this kit with another from Resin In Motion (click this link to see the RIM Empire Kong https://www.oneeffgeof.com/446769332 ) and they both came in a large box with the parts mixed together so I don't know if instructions were inadvertently left out or not. The Kong kit DID have instructions.

The resin cast is fair at best with excessive amounts of flash and seam lines throughout in my opinion. I don't know how old the molds are for this kit which can effect quality with each new casting step as wear and tear sets in. The two figures were all right with the woman sorceress(?) being the better of the two. It seemed that the demon's registration pins in curing the casting process didn't line up exactly so it was offset about 1/64 of an inch so I had a number of fairly obvious seam lines around the figure I had to clean up. 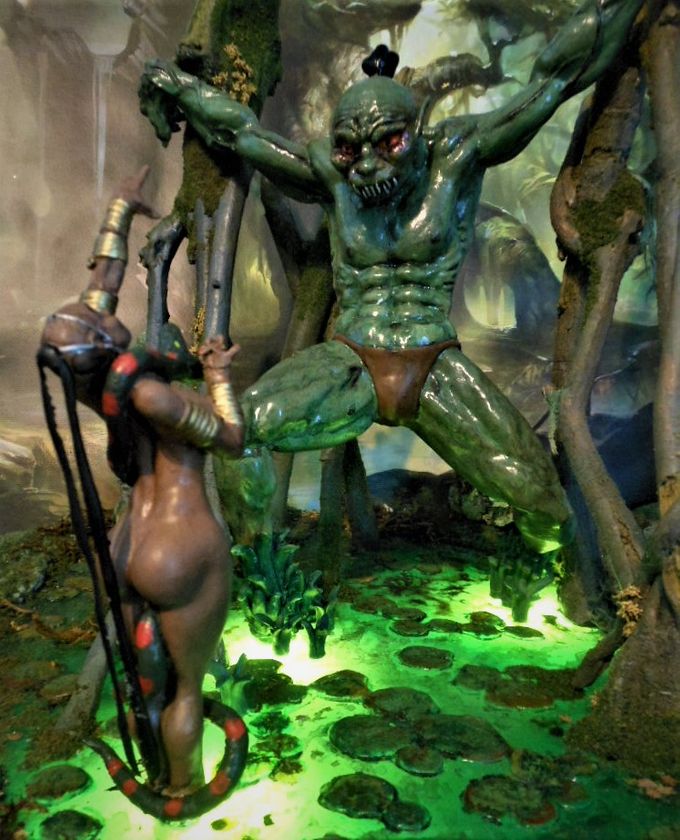 Though it is hard to see in this picture, there was LOTS of flash on these trees which took quite a while to clean up.

The dead fall trees were very bad with tons of flash (see photo). As a caveat, I'm sure it is EXTREMELY difficult to cast such convoluted objects and perhaps I expect too much but I spent over three hours on cleaning up the trees with my Dremel sanding drum and hobby knife. If there is an upside to all of this it would be that some flash could be left behind to represent hanging moss and rot if one was so inclined.

The base is literally a slab of translucent green plastic with lily pads cast into it. On the under side is a giant centipede, snakes and a plant in some kind of 'void' which I wasn't really sure what to do with. I suppose I could make a latex casts and use these objects elsewhere. (Update: I spoke with Mike and he said the purpose of the voids (as I call them) are an easy way to add more detail to the base. By painting them, you get a few extra items of interest in the base when viewed from above.)

Anyway, I'm of mixed feelings about the use of pre-colored clear resin. Resin In Motion has done this with a few of their kits and though I tip my hat to the originality of this idea, I find myself wishing that they left the part clear and let me choose the color.

This kit was featured sometime ago in Issue #58 of Amazing Figure Modeler magazine where a Julian Johnston adds to the kit by lighting the base from beneath. Thinking this a splendid idea, I thought I'd do the same. I got my hands on a large area LED light roughly 3” x 1 ½ ” to be the light source which I would place beneath the demon. That was my thinking at the time anyway.

The addition of lighting made the kit construction obviously much more complicated. I made a sandwich of 1/8 “ thick piece of Masonite for the very bottom, a one inch layer of pink construction foam and another 3/4” layer of 'regular' Styrofoam into which I embedded the green resin base. I hollowed out the pink foam beneath the base to give depth to the swamp and provide an area in which to place my LED light source. I fear carving out beneath the resin was a waste of time because the green resin base was just too 'cloudy' to see any detail through it although a cavity was still necessary to accommodate the LED. 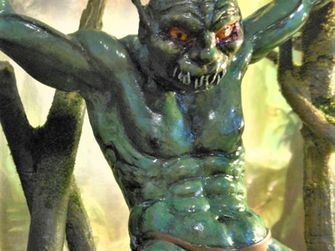 Detail shot of the demon. Click for a larger image. 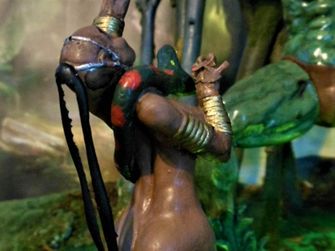 Detail shot of the witch/priestess. Click for a larger image.

I had a 3 'AA' cell battery pack with an on/of switch to power the light which I 'buried' in the right rear corner of the base so I could access it to change the batteries should need be. As it turned out, the LED I had planned on using just wasn't bright enough due to the density and thickness of the resin base so I ended up using chip type LEDS which are much brighter. I wired three in parallel using a 9 volt battery pack to drive the whole thing and placed them beneath the feet of the demon and just in front of the witch figure. Before placing the resin base into the surrounding foam, I applied a coat of bright aluminum paint from a rattle can onto the foam cavity to create a reflective surface that would hopefully further illuminate the swamp water.

After I placed the resin base in its Styrofoam 'nest', I applied an irregular border using Sculpt-mold about the base's perimeter and feathered to the finished edge of the display. After the Sculpt-mold set, I painted it with random blasts of olive drab and sand from Rustoleum's “Camouflage” line of spray paints. (Note that I masked off the resin base prior to painting to prevent over spray). Once this dried, I hid the seam between the edge of the resin and the Sculpt-mold with ground foam and sand secured with dilute PVA (Elmer's) glue. I added miscellaneous debris such as mouse bones, peat moss, lichen and rotten sticks and the like to beef up the scene a bit.

On careful examination, it became apparent the dead fall trees were castings of real plants which accounted for their realistic appearance. I painted the bark a flat medium gray with tan on the exposed 'raw' wood areas. I applied dark and medium green ground foam randomly for moss effects (secured with clear Elmer's glue) along with some yellow plant debris that I had gathered from my driveway which looked a bit like dead flowers. I also distressed some thin cloth that I had painted a greenish gray to look like Spanish moss which I then placed here and there in the forks of a few trees.

Placing the dead trees was a bit of a puzzle. Although there were impressions in the resin base for each of the three pieces, it wasn't obvious where each one belonged however a photo of the completed kit from the AFM article helped me in this regard. There were also a dozen or so small plants that also had impressions in the base for their placement although this was left up to the builder's discretion. In any case, I drilled small holes in all of the base impressions and the ends of the trees/plants to give my five minute epoxy that I was using as an adhesive for something for it to grab onto.

I decided to go with black skin tones for the witch/sorceress, a decision I made primarily based on her physiology. The snake that is erotically wound about her ended up being a dark green with red spots. I am fairly certain no such species exists. The casting for snake was missing one of its fangs (no surprise seeing how delicate it was) so I ended up drilling into the upper jaw with a #64 drill and inserted common pins as substitutes for the missing dentures.

The swamp demon's color palette was very vexing for me. After several iterations, I finally settled on a medium green skin tone. I dry brushed his (its?) numerous veins a chocolate brown and applied a black wash over the entire figure to bring out the details. I managed its a slimy look by applying several coats of glossy clear from a rattle can. 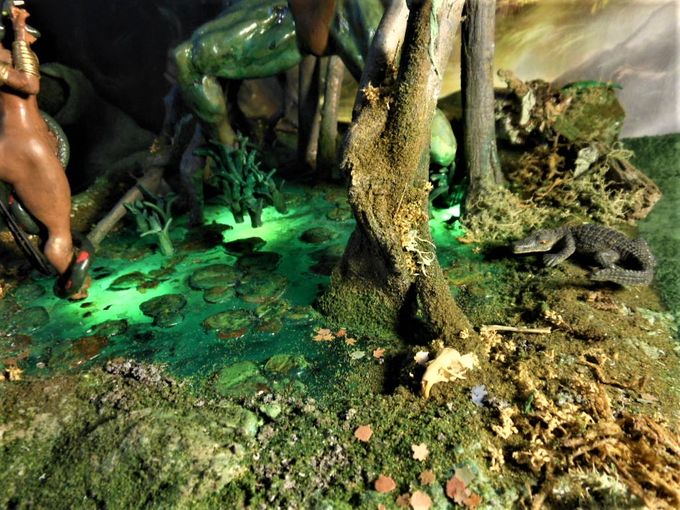 Detail shot of the base. I think I spent more time on the base than any other part of the build up. I think it payed off.

This is a nice kit and captures Frazetta's style perfectly since it is practically an exact copy of the painting on which it is based. I have no idea how Mike Maddi managed to get the rights to copy Frazetta's work but I'm hoping that he can manage to get the rights to make another kit based on Frazetta's fantastic artwork. To the best of my knowledge, there are only a handful of (legal) kits based on the man's work and they are all of his Death Dealer character, a nice figure to be sure but I now think it is time for something new. 8/20/20 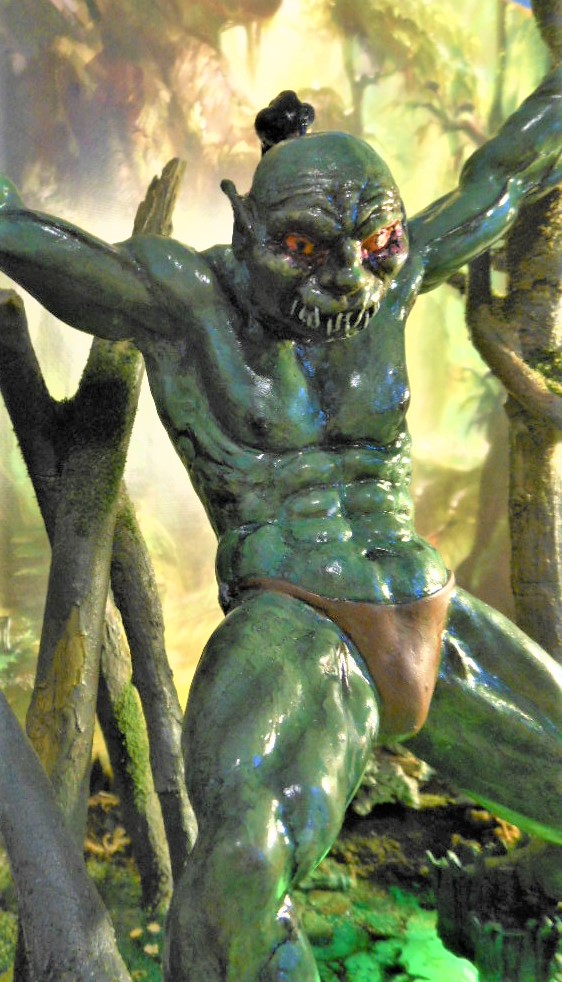