Gillman and His Mate - An Alternate Images Productions resin kit 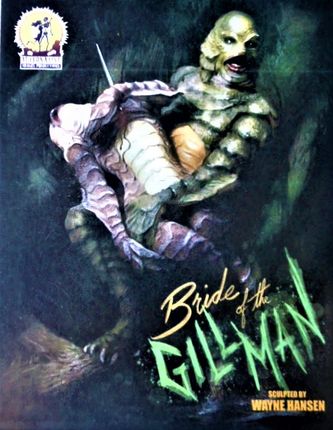 A brief film history lesson: In an effort to compete with the new fangled television sets that were popping up in American living rooms like mushrooms in a fruit cellar, Universal Studios was scrambling to find ways to lure and keep viewers in the theaters across America during the early 50's. Since interest in their “traditional” monster fare was beginning to ebb, someone came up with a concept to supplant the likes of Dracula, Frankenstein and the Wolfman.

That someone was producer William Alland who apparently heard a South American myth about a half man half fish creature that lived in the Amazon. I have often wondered if the Deep Ones from the Cthulhu Mythos may have had an influence in this origin story but that may just be wishful thinking on my part.

In any case, the Creature from the Black Lagoon or The Gillman as he is also known was hatched (pardon the pun) is probably one of the most American of the cinema monsters. The film was released in 3D as well as 2D and curiously in black and white. One would have thought that it would have almost demanded that it be shot in Technicolor considering the setting but that was not to be. The film was a success and spawned a pair of sequels though the quality of each diminished a bit with each retelling of basically the same story.

The Gillman is one of the more interesting forms of human sized movie monsters in my view. A beautiful rendition of it was designed by Stan Winston for the 1987 cult film “The Monster Squad” along with the Abe Sapien character in “Hellboy” (2004) and the creature in “The Shape Of Water” (2017) are also terrific variations of this animal. 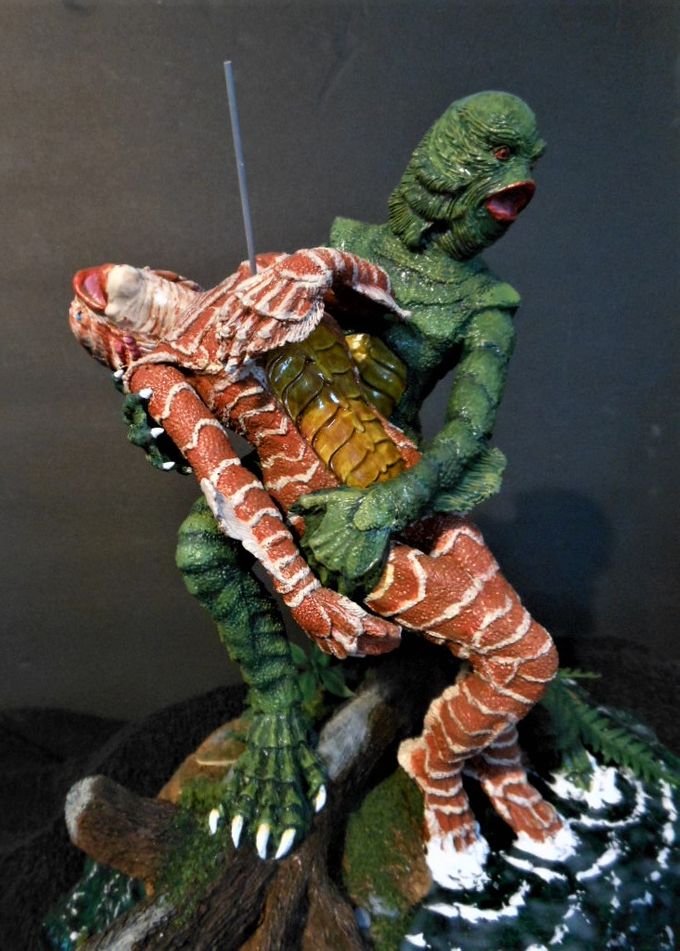 Which brings us to this great kit from Alternate Images Productions displaying the Gill Man holding his apparently deceased mate in his arms, throwing a “if looks could kill” glare over its shoulder at the perpetrators. This remarkable sculpt is by Wayne Hansen and is breath taking in its detail, The size is roughly that of the old Aurora plastic monster kits and would fit in a display of them quite nicely.

The cast is pretty clean though it did require a bit of clean up but nothing too objectionable. Perhaps the hardest part was placing the Gillman's mate in his arms since they are intertwined a bit. This eventually proved to be a plus since the arms of both were cast separately so painting was a LOT easier than if they were melded together in a single “lump” of the two figures.

The base is very nice and I added a few things such as ground foam to suggest moss on the fallen log, some plastic aquarium plants to break up the monotony of just having cast ferns along with a few mouse bones here and there. Because I didn't have a perfect union with the feet of the creatures in the water, I disguised the gap with some Liquitex Modeling Paste (similar to toothpaste in color & consistency) to act as water splashing.

AIP has very nice photos of their completed kits on Facebook and “The Gillman And His Mate” was no exception. I was struggling a bit with how I should paint this bad boy but after I saw the production photos, my mind was made up for me, the result of which you see before you.

Before painting, I trial fitted everything, trimming away excess resin as needed. I mounted the arm pins with a lot of slop so I could manipulate the pre-painted limbs to provide a better union with their respective contact points. I prefer five minute epoxy in most of my work since I get a little time to position each piece where it should be and I don't mind the two or three minutes it takes to set.

Note that the assembly sequence is crucial since a number of parts overlap the other. I started by pinning but NOT gluing the Gillman to the base. Next, place his mate on his hip and position his left hand to his wrist and insert the mate's feet into the special depressions in the base. If all looks well and fits snugly, using 5 minute epoxy, glue the Gillman's feet into position and BEFORE the epoxy sets, lay his mate on his hip with his left left hand pressing against his wrist. Once the epoxy has set, glue the mate's feet into place on the base, making sure that the left hand and wrist are in alignment on her stomach. Once this assembly has set, glue the mate's right arm into place followed by the Gillman's right arm under the mate's shoulder. If this sounds complicated, it is. Try a few dry runs before using any adhesives and making sure the parts mate as tightly as possible. 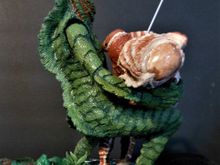 Right rear shot of this great kit. Click for a larger image. 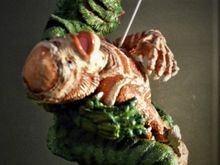 Semi-close up of the presumably expired Gillwoman. Click for a larger image. 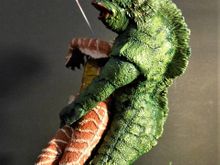 Left side of the kit. Click for a larger image. 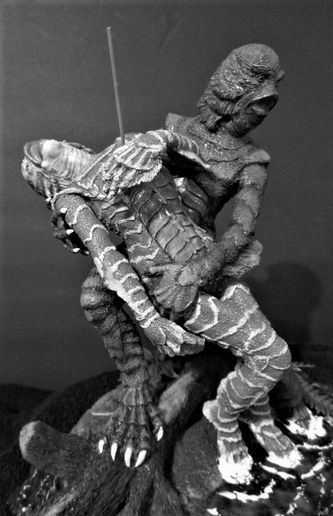 This is how this scene would have looked if it had been filmed in black and white as had the original "Creature From The Black Lagoon".

Once the whole assembly was completed & painted, I coated the 'water' surface with Crystal Clear Gallery Glass which gives a nice ripple appearance. The base already has the ripple effect but the Gallery Glass hides the interface between the creatures' feet and 'water'.

Alternate Images Productions operates mostly on Facebook although they have a web page that leaves much to be desired. Why they choose to operate this way (on Facebook) is a puzzle since you literally stumble into the really nice array of kits that they sell which is a shame. I bought two kits via Facebook and although the transaction went smoothly, I think they're losing a lot of business with this arrangement IMHO. Despite all this, the packaging was amazing. Each piece was individually wrapped in bubble wrap and comes in a nice box with great art on the lid. I only mention this because a lot of the outfits I do business with are really sloppy with the shipping/handling part of the biz and it was a pleasure to deal with a company that takes pride in their products and “No”, I didn't get any perks to write that (although they would be welcome). 9/8/20 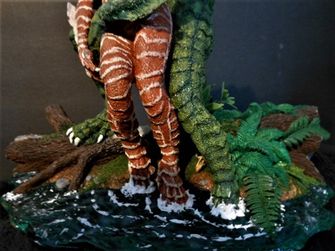 Close up of the front of the kit. Click for a larger image. 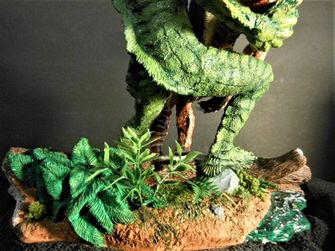 Close up of the rear of the base. Click for a larger image.