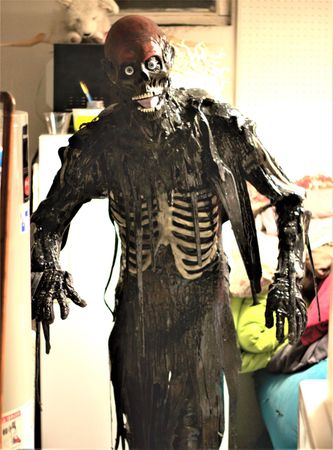 A still from the film showing the titular creature of this build.

The late 1960's were tumultuous times in the United States and I should know since I grew up during them. Sweeping changes moved across the country both socially and artistically and though he wasn't aware of it at the time, George Romero introduced us to what has become a world wide phenomenon which still haunts our nightmares today, that being the zombie.

Up until that time, the movie zombie was a lethargic creature created by voodoo rituals which was controlled by their creator to perform its master's bidding, usually directed towards hapless white heroines. I never found them to be particularly frightening and ranked them with their similar Egyptian mummy counterpart, easily eluded if you didn't stay in one place for too long.

Romero's zombies on the other hand, though slow moving, found their strength in numbers and only damage to their brain would take them down. Oh, and they ate you ALIVE if you fell into their grasp. Their creation was never exactly spelled out although it was hinted at in “The Night Of The Living Dead” (1968) by supposing a satellite returning from Venus has unleashed some sort of radiation that reanimated the dead. Did I mention if you should die, you too will become one of the ravenous undead. NOTLD quickly became a critical and cult favorite (despite criticism for its explicit gore) and soon spawned five sequels essentially telling the story of the zombie plague as it engulfed the globe. 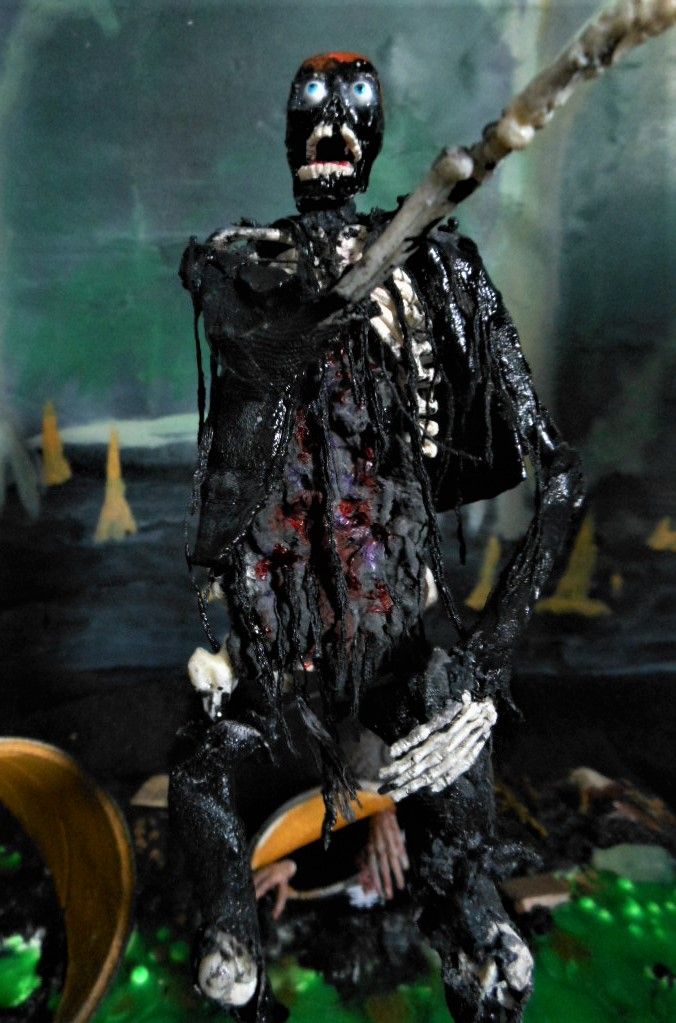 This is admittedly a long way around to the Tar Man in “Return Of The Living Dead” (1985) but I felt that some backstory would help in explaining its origins. ROTLD was shot more in a horror comedy vein and although a few nods are made towards Romero's original handiwork, it departs significantly in its tone and delivery. These zombies are fast, talk and plan so they really aren't that much different than humans aside from the brain eating part. I'm not that much of a fan of the film because I found it pretty silly coupled with very hammy performances though I suppose that was the look they were going for.

The film takes place in a medical warehouse operated by a pair of idiots who inadvertently open a 55 gallon drum containing one of the zombies, the fumes of which infect the idiots and a number of the medical specimens in the warehouse. What emerges (after a bit) is our Tar Man, which I'm trying emulate here. Although the film's Tar Man spends his time in the basement of the warehouse, I thought I'd give it a different take by having him (or a version of him) stumbling about a toxic waste dump. I should point out the I'm not the first modeling this setting so my thanks to those that went before.

The first step in this build was to get my hands on a model skeleton. I have a couple Visible Man models but these were a bit too large standing roughly sixteen inches tall. I ended up using a very nice detailed model put out by Learning Resources which stood a tad over nine inches. It had to be assembled but the parts fit together well with the added bonus of being almost fully articulated which made it pose able.

After I got the skeleton model posed the way I wanted, secured the joints with AC glue. I then made very crude clothing out of an old T shirt of mine to simulate a dress suit. Since neatness didn't count in this instance, I frayed the pant leg bottoms and sleeves with an Xacto knife allowing the knee and elbow joints to poke through. I then cut a 8 inch length of string which I unraveled to give me about a dozen strands which I placed on the figure similar to how it appeared in the film. I should mention that I painted the strands with a 50/50 mixture of Mod Podge and black craft paint BEFORE I applied them to the Tar Man just to make handling and placement easier. The pants, coat and sleeves were all painted with the Mod Podge mixture as well after I glued them in place with AC glue. 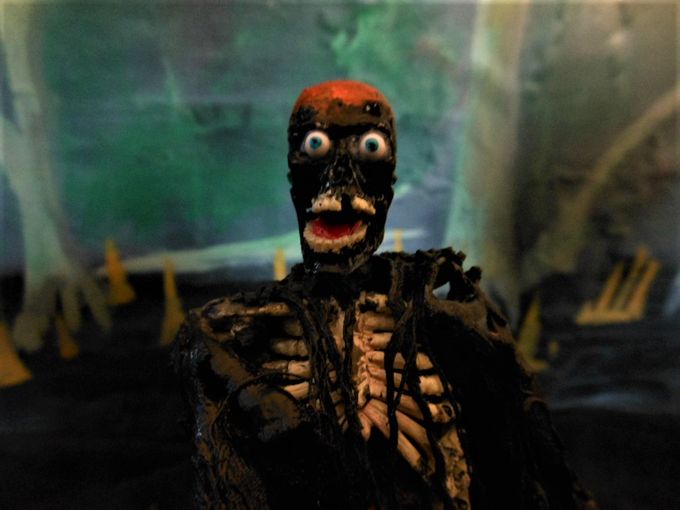 The base was next and what would one find in a toxic waste dump? Well, rusty leaking 55 gallon drums, that's what! A quick search on Thingaverse (my favorite 3D printer file source) turned up a number of drums, both steel and plastic. In this application, one could go with either though the plastic drums would have to be modified somewhat to have a “window” in the side or lid as was seen in the film. I went with the steel versions.

After I printed a pair of partial drums, I found a piece of 9” x 13” fiber board and built up the surface with Sculpt-mold irregularly with a flat area near the center for a polluted water way.  After I placed the two drums and the Sculpt-mold had set, I mixed up a batch of liquid resin which I poured into the flat water area and added a number of small porcelain balls to act as bubbles. Once the resin cured, I painted the “water” a fluorescent green and the surrounding terrain with Mod Podge tinted black. Before either of the painted areas were dry, I lightly misted the entire display's surface with water which caused the black and green to flow together randomly presenting a convincing oily look to the water's surface.

Before placing the drums, I base painted them flat aluminum and then, using the salt texturing technique (see Tip #28 in my Hints & Tips section), I applied red primer and gloss black from rattle cans. Once everything had cured for the night, I removed the salt areas by gently scrubbing with coarse sandpaper revealing a nice eroded and rusty appearance. 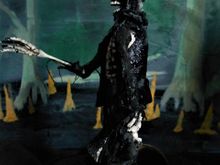 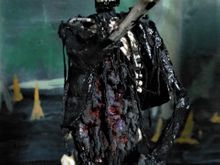 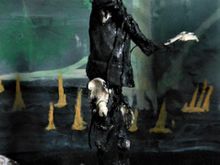 I wanted to show one of the zombies breaking out of a drum (not unlike a chick hatching) so I 3D printed up a lid which I curled back using a heat gun. I added a pair of 3D printed rotten skeletal hands in the opening to show it would soon be joining the party. The rest of the terrain is a mixture of broken bottles, trash, leaves, wood, books and weeds that I dug out of my stash and placed randomly about the scene.

As I said earlier, I wasn't that impressed with the film as a whole but the Tar Man certainly caught my attention. They got a very thin actor or mime to be the Tar Man because it really looked like a skeleton wobbling about the warehouse looking for BRAINS!!! 11/17/20 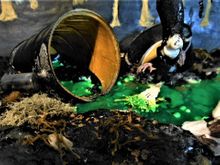 Detail shot of the left side of the diorama. Click for a larger image. 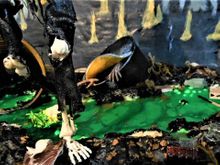 Detail shot of the right side of the diorama. Click for a larger image. 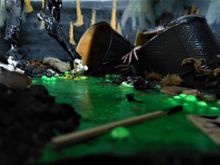 Frog's eye view of the waste dump. You can see another zombie emerging from a drum in the background. Click for a larger view.