THEM! In The Nest 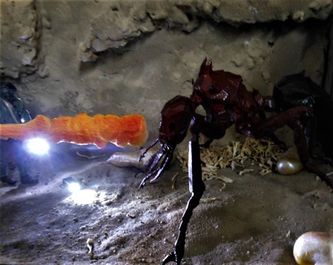 This is my second effort in displaying one of my favorite 50's science fiction classics, “THEM!”. My first try called “Drain 267” (https://www.oneeffgeof.com/433293709) was pretty ambitious and garnered a few awards primarily, I suspect, due to the light and sound effects. This time out will also have light and sound effects but not quite as elaborate.

The scene I decided to emulate from the film occurs roughly a third of way in when our heroes are forced to descend into the recently discovered nest to determine if it has or had queen ants. The scene is very suspenseful as the disparate team of the woman entomologist, Dr. Pat Medford (played by Joan Weldon), FBI Special Agent Robert Graham (James Arness) along with a New Mexico state police Sargent Ben Peterson (James Whitmore) slowly descend into the nest. At one point, Pat remarks that the nest walls are being held together with saliva to which James Whitmore replies, “Spits all that's holding me together too.” I found this scene to be especially eerie because the heroic group resemble insects themselves due to their wearing gas masks as protection against the cyanide gas previously dropped inside to exterminate the nest.

My first step was to make a rough drawing as I wanted for the scene. I kinda went with the so-called “ant farm” I used to see advertised on the back of comic books when I was a kid. I drew a wall plan showing how the ant tunnels would be laid out which proved to be the best place to make any mistakes since they could easily be resolved with an eraser.

Once I got a design that worked, I had to come up with a way to display the scene. Since the scale of the scene would be driven by the human figures in it, I needed something large and strong but not overly cumbersome. I would be using Marauder “Gun-Runners” series of 1:18 scale figures which are very detailed and articulated versions of GI Joe toys which have a myriad of weapons and detailing parts which are reasonably priced. As luck would have it, they have female soldiers as well so 'dressing up' my three movie characters wasn't as hard as I had expected. 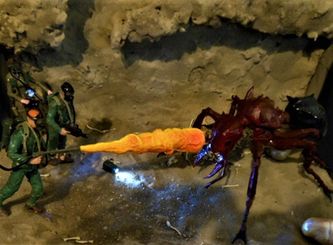 I had intended on using a resin THEM! ant kit I had in my stash but decided to see what I might be able to print on my 3D printer. As in the past, Thingaverse (an online source of free 3D printer recipes) came through with flying colors. I found a very nice low detailed ant recipe that I could set the scale to match those in the film. The print was a little difficult due to the complexity of the ant but after a few tries and five bucks of printer filament, I got a very nice version on this creature.

Now came the hard part in how best to house the display. I had considered making a tall box enclosure but, as Fate would have it, I happened to come across a tall shadow box at Micheals that filled the bill perfectly, measuring at 17” wide by 32” tall by 3” deep. I used 1” pink foam insulation for the back of the nest and established the tunnels with varying thicknesses of the same material. Once I was happy with the configuration, I coated it with a thin layer of SculptaMold over the entire interior of the nest. After the Sculpt-mold cured, I coated it with a layer of Mod Podge that I sprinkled with beach sand while it was still wet. Once that layer set, I came back with random shots of sand and khaki spray paint from rattle cans. 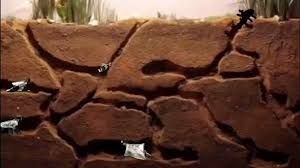 A real ant nest that I used for reference during the constriction of the diorama.

The cactus topside are 3D prints and the ant larvae are a neat plastic material (the name of which unfortunately escapes me) that melts around 1500 F that I sculpted just using my hands. The plastic hardens into a semi-transparent form which I dry brushed with clear yellow then with an iridescent pearl white. The dead ant about half way up the nest is actually an aborted 3D ant print I retrieved from my scrap print box which further reinforces my philosophy: “NEVER throw anything away!”

The light and sound effects that I wanted to include were possible (once again) with collaboration of Stan Koziol of Starling Technologies. Stan's work has made it possible to add features to my dioramas that I would never have achieved on my own. I suggest that you visit his site for great electronic kits to add that extra kick to your out of the box science fiction model kits along with personal kit designs you may need. He prices are reasonably and his service is professional at every level. Here's his link: https://www.starling-tech.com/.

Anyway, I wanted to add a little more to the scene, namely the ant's eerie “trilling” call along with some simple flashlights as seen in the film. A few emails to Stan resulted in a nice little package comprised of the sound effects board and speaker, 3 pre-wired LEDS, a battery pack, external power jack and a flip/flop switch to toggle between the two.

As I said earlier, the Gun-Runner figures were very detailed but, me being me, I had to add a bit more. I fabricated the three flashlights out of plastic L stock and LED bezels with staples substututing as hand grips. The camera that Professor Medford is holding was scratch built from plastic & wood, again, out of my scrap box.. The flame effect is expandable insulating foam from the can which, after a couple tries, yielded the shape I was looking for. The smoke coming off the partial ant is cotton misted with gray and black paint. Last but not least, I liberally spread mouse bones about to suggest past victims of the ants.

Not much else to say. For you purists out there, I realize that the diorama doesn't exactly follow the film but I think it captures the look and feeling of this terrifically suspenseful scene. There is a brief video below which displays all the 'action'. 2/04/21