I purchased this “Mad Monster” 1/12 scale resin kit for something of a change of pace from what is generally seen in my collection. This 1997 Jimmy Flintstone kit, called “Von Hitch's Rocket Rod” was sculpted by Ed Newton and owes it's overall theme as characterized by the work of Ed “Big Daddy” Roth.

Ed Roth came into his own, as it were, in the 1960's where his grotesque subject matter of bizarre creatures driving equally bizarre hot rods soon became a national craze (for teen boys at least). During this period, his famous Rat Fink creation, which up until that time, was generally seen on Tee shirts found itself in a series of plastic model kits from Revell. Aurora soon came out with their line of dragster models piloted by classic monsters such as Dracula, Frankenstein and the Wolfman. None of these appealed to me in the least.

This kit has thirteen cast resin and zamak pieces of reasonable quality although some had surprisingly large chunks of excess material that had to be removed. The instructions were fair though not really necessary. The figure had oodles of hair line seam lines which didn't become apparent until after a layer or two of paint was applied which proved to be very irritating. 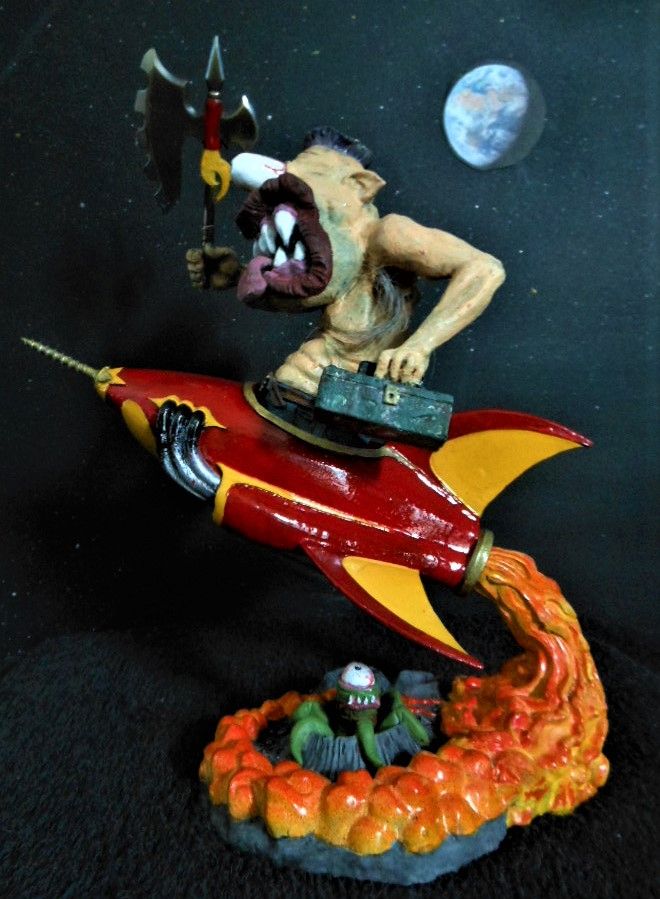 As I mentioned, some parts were made of metal, namely the figure's tongue, rocket nose cone and sword blade which didn't seem necessary to me since resin casts of them would have been just fine from what I can determine. As it turned out, I wasn't that happy with the sword blade anyway, so I substituted a key chain fob I had in my box of odd stuff which looked better to me. 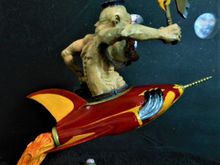 A right side shot of the kit. Click for a larger image 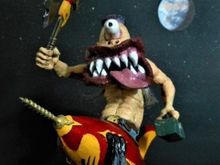 A "coming at ya" shot of the kit. Click for a larger image. 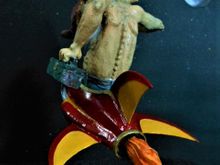 A rear shot of the kit. Click for a larger image. 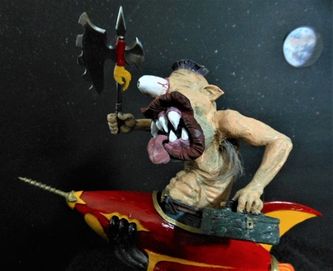 I used the paint/salt technique on the tool box for the battered and worn appearance that I like. Go to tip # 28 in the “Hints & Tips” section of this web page for a description of this simple but effective process. The rest of the parts were brush painted after assembly.

The only other changes I made to the kit was to use a screw nail for the rocket's nose cone, a rear nozzle and hair (mine) in the cyclops' armpits. Kinda silly, I'll admit but what the heck do we build these things for if not to add our own little tweaks to amuse ourselves? 7/8/21 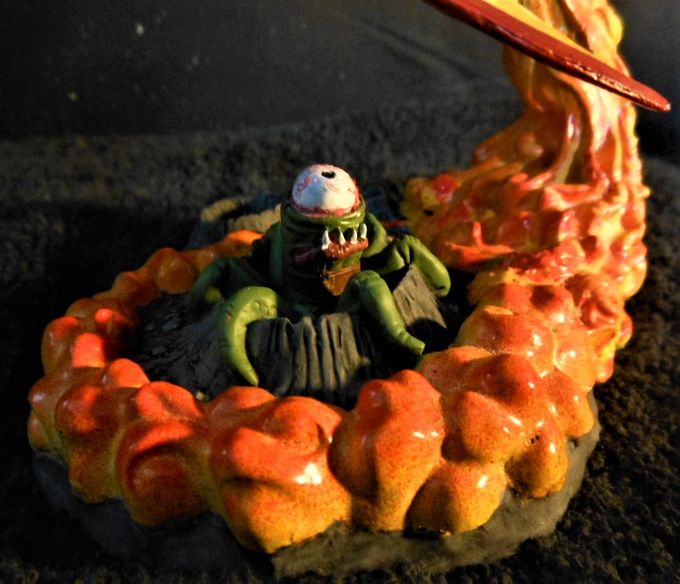 Close up of a little sextipus alien watching the blast off.