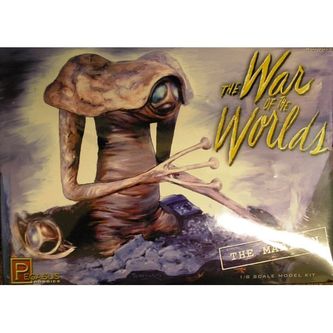 Here's a pretty straightforward kit from Pegasus Hobbies of the Martian (NOT Matt Damon) seen in the 1953 science fiction classic, “The War Of The Worlds”. The kit is comprised of 13 pieces (including the base) cast in the God awful orange plastic that they used for their “Dragonslayer” Vermithrax kit. As stated elsewhere, I think Pegasus farms their work out to different suppliers which might explain the variations in the quality of their kits.

At any rate, the kit can be assembled without any adhesives which is the route I took. Besides the Martian (which comes with an extra set of arms for different poses), you get two books, a section of the Martian probe tentacle and a Martian camera or viewer. To the Twilight Zone fan, one of the books is entitled “To Serve Man” and the other “The War Of The Worlds”. 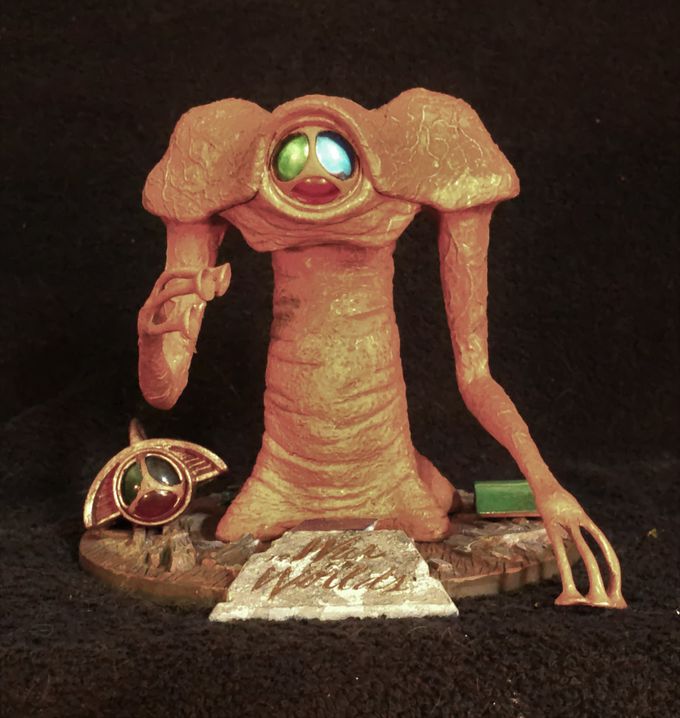 Although the Martian in the film is glossy, I decided to go with a flat appearance which looked better to me for some reason.

After hand painting the two Martian tri-lenses with clear blue, green & red, I spray painted the assembled Martian with a flat gray primer which to days to dry. I think I got a mild chemical reaction between the plastic and paint but after a few days, all was well.

I then painted the entire figure a pumpkin orange followed by a wash of dark brown in acrylic craft paint to highlight the multitude of veins on the creature's surface. I let this dry over night and then I came back with a gentle scrubbing with a dry cloth to remove the paint on the veins to bring out the gray layer beneath which highlighted the veins quite nicely.

I painted the base (which was made of clear plastic) a flat brown with several washes of gray & black to bring out the wooden floor detail.

I painted the Martian tentacle and “viewer” a copper color as seen in the film and Super Glued them in place on the base. Ditto with the two books although they were painted green and blue, with their titles highlighted in gold. 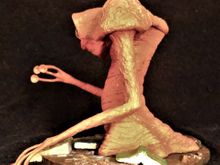 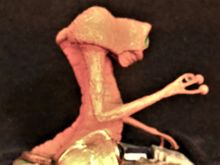 I was toying with the idea of lighting this kit which would have been a simple matter. Though the base is thin, one could tuck a CR1620 button cell beneath it and run a wire up into the hollow head that easily could accommodate an LED. Another method would be to place a battery inside the hollow body, the only challenge being how to disguise the on/off switch.

If I was really “into” this kit, I might have gone that route but I ultimately decided to just stuff cotton behind the Martian eye to provide a bounce light effect to enhance the colored lenses.

This is definitely a great kit for the beginning modeler and fan of the film. Assembly took literally minutes with painting being the most time consuming aspect of the build. 5/30/22