The Night Mare Before Christmas 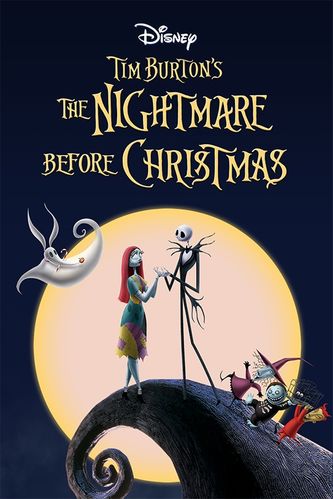 The DVD cover art for this family favorite.

SOLD! - This a commission I have recently completed based on Tim Burton's 1993 stop motion classic “The Nightmare Before Christmas”. All of the objects in the display were either 3D resin or filament printed. I found a nice fairly inexpensive file on the CG Trader webpage, a huge source for 3D printing files on the Internet.

The base and moon were filament printed which proved to be a simple process. The 3d resin prints were another matter entirely. I wanted to make the prints as large as my resin printer could handle which ended up with the two main characters, Sally and Jack Skellington being about six inches tall. The problem I was encountering was incomplete prints with a Sally arm missing or partially printed or the Jack figure's coattails or fingers distorted. Although I could print both figures at once, the operation took about 13 hours to complete, I ended up making four print sessions from which I could swap out good parts for bad. 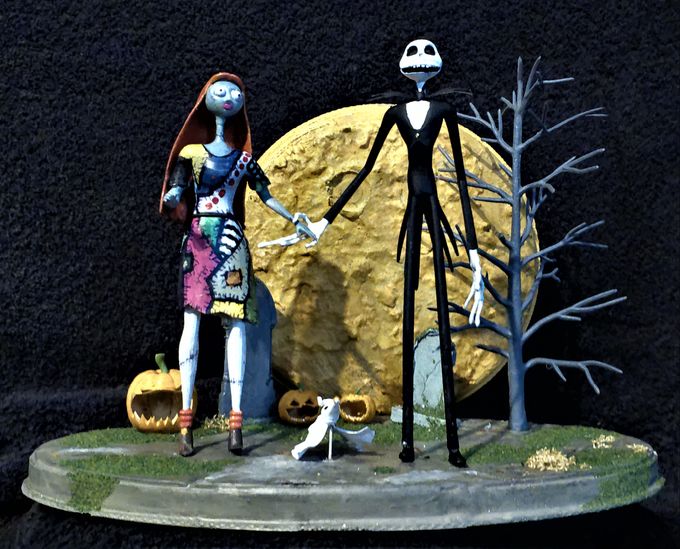 Once I finally got figures that I was happy with, I printed three Jack-o-Lanterns, a pair of tombstones and their ghost dog Zero. This resulted in a couple reprints but time spent on the operation being fairly short (~3 hours) which gave me the time window to paint Jack & Sally. Jack was pretty simple being mostly flat black and white.

Sally's color scheme was helter skelter since her origin story was as a rag doll. I downloaded as many pictures I could get my hands on and none of them were the same so I pretty much had carte blanche on her dress coloration. I used a fine tip black Magic Marker for the seams and very fine point black Magic Marker for the stitching. Zero, being a ghost, was simply flat white. The pumpkins were orange (what else) though I used a lighter shade on the inside and olive drab for the stems. 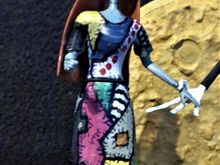 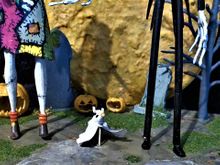 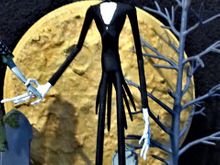 The moon was just a flat disk I ran off on my filament printer. I coated the front facing surface with a relatively thin and uneven layer of Sculpt-a-mold. Before this cured I pressed a few different sizes of bottle caps to give me passable craters. Once this had all cured, I painted the surface with a bright orange followed by a wash of very dilute black to bring out the surface texture.

The base was a distorted zodiac circle I printed (you can do that with 3D printers) to accommodate the size of the scene I wished to present being twelve inches long by six inches wide. I spray painted the surface a medium tan followed by a wash of dilute black to bring out the cravings. I used ground foam glue with a dilute solution of PVA glue for the few green patches scattered across the surface. The dead tree on the right was an seven inch armature from Woodland Scenics which I painted a medium gray.

So there you have it. This project took much longer than I had anticipated due to the failed resin prints but it was also a learning experience for me in how to get around that type of problem. 9/13/22 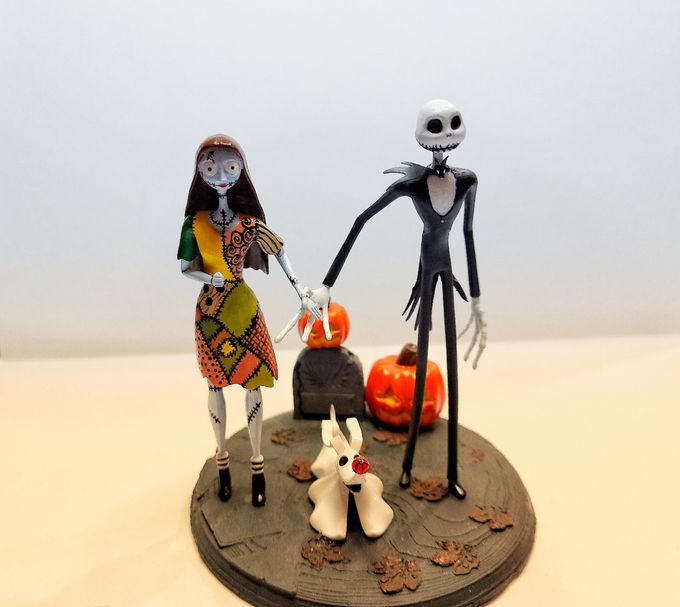 This is the basic model you would get on the download which is significantly different that what I built.