“The Giant Behemoth” (a redundant title if there ever was one) is one of several giant reptiles on the loose films that lumbered across the silver screen in the 50's and 60's. Unfortunately “Behemoth” wasn't one of the better ones. In fact, it is practically the same plot as 1953's “The Beast From 20,000 Fathoms” from six years before in which multiple plot similarities abound. Part of this was due to the fact that the screenplay and direction were by the same guy, Eugene Lourie. The only saving grace of the film is that the stop motion animation sequences are pretty good which shouldn't be a surprise any fans of the genre since it was done by Willis O'Brien of“King Kong” fame.  That's the poster for the film on the right.

Unfortunately, the other “special effects”are laughable such as the static puppet head shown throughout the film as well as the cartoon image of the radioactive behemoth swimming under water.

I purchased this over priced kit (IMHO) on eBay which is my usual kit source. I was expecting a larger scale kit (this one is roughly HOscale (1/87)) than I got and the overall quality was fair.

I ended up purchasing a Woodland Scenics kit for under thirty bucks to replace the resin building (which was exactly the same building as it turned out) which had its windows filled in with resin, requiring too much effort to clean up for what I wanted to do with it. There was no roofing material provided with the original kit but I got one with the Woodland Scenics kit so it was all good.

Additionally, the resin cast had big lumps of sprue on various parts and the finer details (street lights, hydrants and the like) were buried in a slab of flash. For $199.95 plus shipping, I was expecting a bit more based on similar kits in the same price range so I was generally very disappointed with this kit. 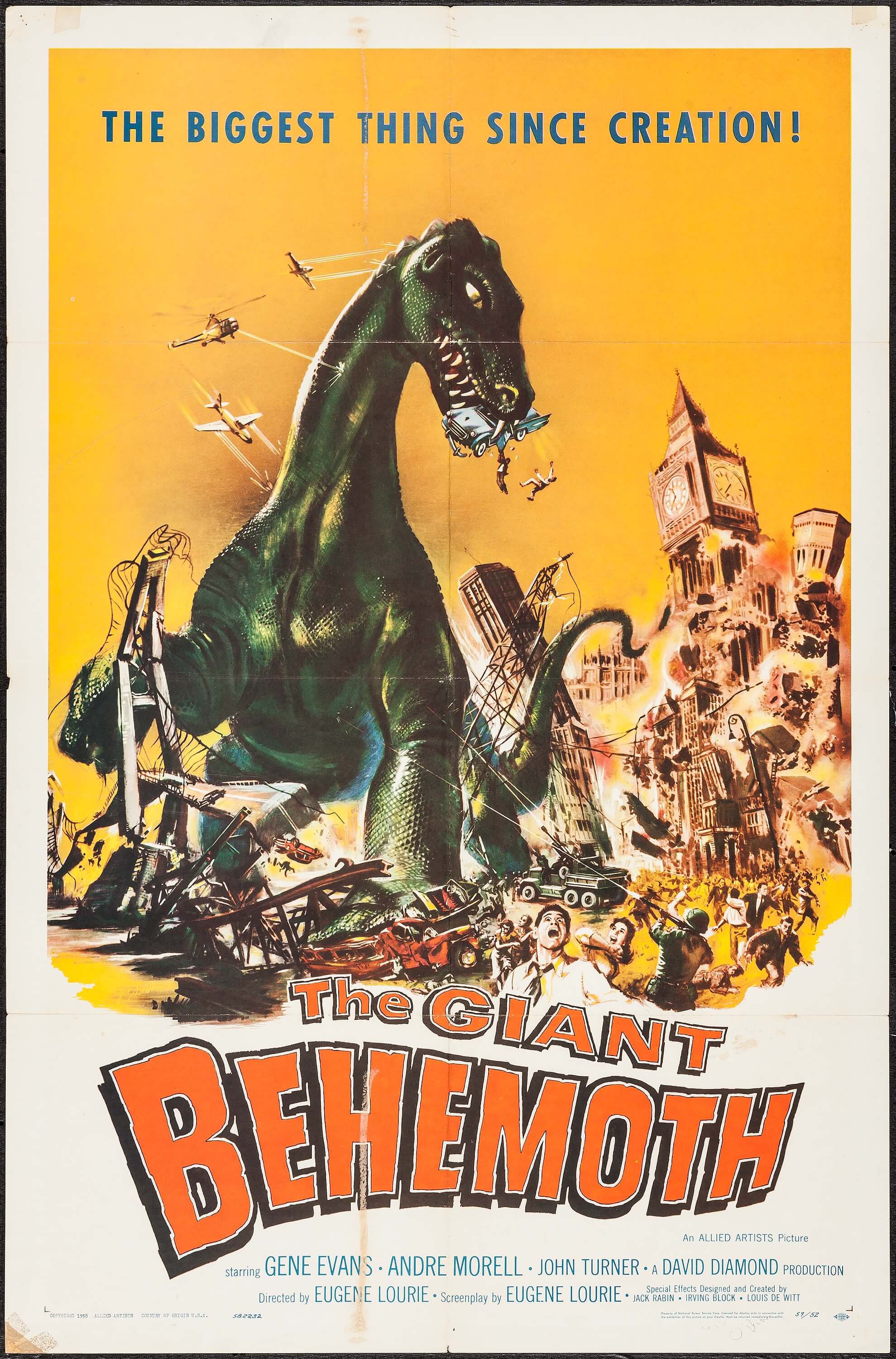 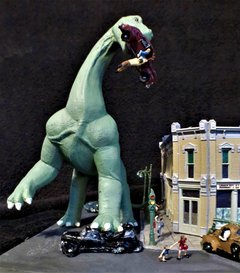 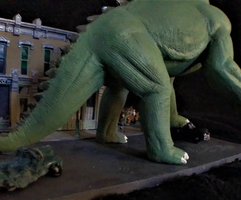 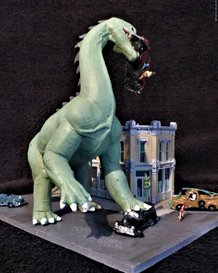 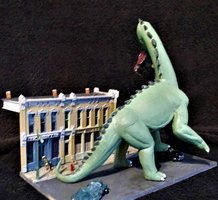 All that a side, the sculpt of the behemoth by Chris Lynch is nicely done. A few squashed cars are also provided along with the street details I have already mentioned. I particularly liked the guy hanging from one of the cars that had found its way into the behemoth's mouth.

As is my nature, I added more details to the the scene to make it more interesting. I drilled out the side window of the crashed pick-up truck and added a male figure leaning out of the cab as if to checkout the approaching monster. I also added a few running figures from my private stash on the street and sidewalk.

I spent a lot of time on the building by adding roof details along with installing curtains in the store windows that I had glazed with a sheet of clear acetate. Once these features had set, I installed a sheet of black paper behind the windows so an observer couldn't see through the building, an old model railroading trick.

Painting was pretty straight forward with color schemes of my own choosing since the film was shot in black & white. I did a little research on the Google machine to see what colors of automobiles were in1950's Britain. For the building, I went with a tan brick coloration with gray washes to simulate mortar and to help bring out the building details. I painted the building's trim in blue and green pastels.

The street light and lamps were painted dark green and fire hydrants (which they don't have in England curiously enough) red. I went with brown, black, blue and maroon for the various motor vehicles.

Generally speaking, this kit presents a fairly good representation of the film although there are couple kits out there that do the same. I would rate the skills needed to complete this kit (sans my additions) as novice level. Unfortunately, the high price and average detailing prevents me from recommending this kit which I would rate a C minus at best. 11/30/22