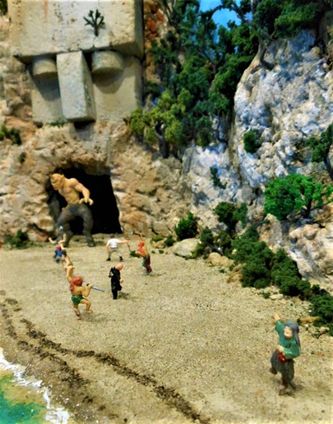 “The 7th Voyage of Sinbad” is one of the greatest fantasy films ever made and is probably my most favorite of all the films I have seen for numerous reasons. Part of this enthusiasm I have for it undoubtedly is because I saw it at the tender age of eight when it was originally released in 1958. The plot is clever and well written, the acting believable, Bernard Herrmann's soundtrack is engaging and the effects work by Ray Harryhausen is, in my view, his very best, “Jason and The Argonauts” notwithstanding.

I have made a number of resin kits based on this film which I enjoyed building and adding to the Harryhausen section of my display room but this is my first diorama of this film. I had many ideas, false starts and set backs about what I should make but the iconic image (to me at least) is when the cyclops emerges from the mouth of the gigantic idol's mouth in pursuit of the evil magician, Sokurah.

The main consideration in the construction of this diorama was the scale of the scene. Due to my inability to sculpt, I was forced to research what was available on the market that would provide me with the figures that I needed, primarily those of Sinbad's crew and next in line would be the cyclops itself. 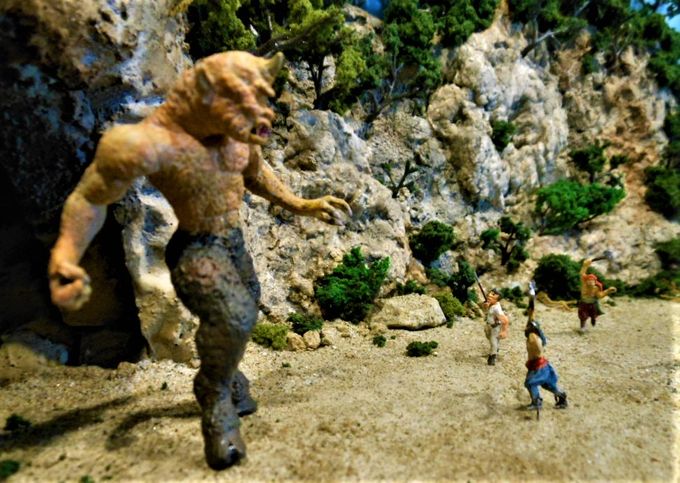 As luck would have it, I found a company called Mars that had put out a line of 1/72 scale Barbarian pirate figures in 1970 (!!!) that were still available today on eBay and elsewhere. There were 48 figures in the box that were cast on four trees with 12 figures per tree. Each tree had a damsel in distress (I presume) which dropped my total on useful figures down to 44 but of these, 30 or so were adequate for my needs. I also had some 1/72 scale beach scene figures from another project which I also used.

Most of the Harryhausen cyclops figures out there were much too large until I took a chance and purchased an X Plus version of this figure which luckily was VERY close to 1/72 scale, so I was on my way.

Though not included in my final version, I'll describe one of the false starts I mentioned earlier. I had intended that the diorama would have the crossbow that Sinbad had brought on his return to Colossa to take care of any cyclops' they might encounter but was ultimately used to kill Sokurah's dragon during the conclusion of the film.

Studying as many scenes with the crossbow I could find, I used one that had one of Sinbad's crew standing next to the crossbow's carriage wheel. Working on the assumption that the sailor was six feet tall as a reference point, I roughed out a set of measurements for the crossbow dimensions. This proved to be unworkable since, even at 1/72 scale, the crossbow MODEL would be just over a foot long, way too big for the scene. Even after cutting is down by 25%, it still was large but I went ahead and built it anyway. Using my 3D printer to fabricate some of the parts such as the wheels, bow and arrow head along with “stick built” sections of wood and wire, it took me roughly a week to complete.

Once completed, I staged it with my 1/72 scale cyclops only to find it was still too large in that situation but as I looked more closely, the film's version would have been out of place as well had it been used to kill a cyclops as was intended. The arrow would have easily decapitated a cyclops if not flying completely through the monster once it was released so, theatrically, it wouldn't have “worked” either, so I reluctantly put the crossbow model aside for now.

Next, I wanted to model the huge idol head/cave mouth in the scene. The construction was of 1” thick pink insulation foam and due to the regular dimensions of the idol head, it was a fairly simple process to build. The rocky terrain that bordered the beach scene was a bit trickier since I wanted to copy the formations as they were in the film but I didn't want to eat all the base area with cliffs. I ended up using the 1” insulation again which I carved by slashing and gouging the rough form with hobby knives and screwdrivers to suggest an eroded surface along with some plaster castings and Sculpt-mold to add features to add visual interest to the scene. I painted everything with a layer of black tinted Mod Podge to seal the foam from any solvents in any aerosol paints I might use. 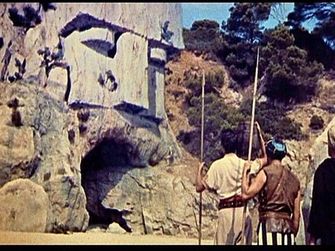 Still from the film that I used as a guide for the scene's construction. 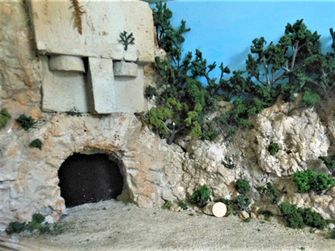 Completed diorama sans figures. The shiny circle near the center of the shot is a penny to provide a size reference. 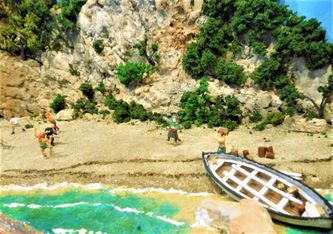 The trees were made using the smaller armatures available from Woodland Scenics with dark green foam and assorted twigs from my back yard. The beach was made by placing an irregular layer of 1/8” foam board to raise it up a bit. I coated it with a layer of PVA glue and then dusted it with sifted yellow clay I had in my stash to simulate sand along with a few narrow strips of crushed up real tea leaves for dried up seaweed. The area that was at shore's edge and “sea level” was painted with metallic blue and green as a base coat. Once the paint had dried, I came back and placed a thick application of PVA glue onto which I placed several layers of toilet paper, letting it totally absorb the PVA glue. Before the glue dried, I pushed the paper into ridges to resemble waves with a stiff 1/2” paint brush. Once this cured (about overnight), I applied four or five coats of high gloss urethane to act as water, letting each dry between applications but any clear gloss paint would do for this step. I finished up by applying Liquitex molding paste on the waves crests and splashes to suggest surf action on the beach.

For a final bit of detail, I 3D printed a life boat from a recipe I got from Thingaverse that resembled the one seen in the film. I added a few casks, oars and small boxes from my old model railroading days to complete the scene.

Despite my disappointment in not being able to use the crossbow that I had spent so much time with, I'm pretty pleased with the way this little scene came out. Hopefully it will inspire some of you to try your hand at recreating some of your favorite scenes from Hollywood. 6/5/20 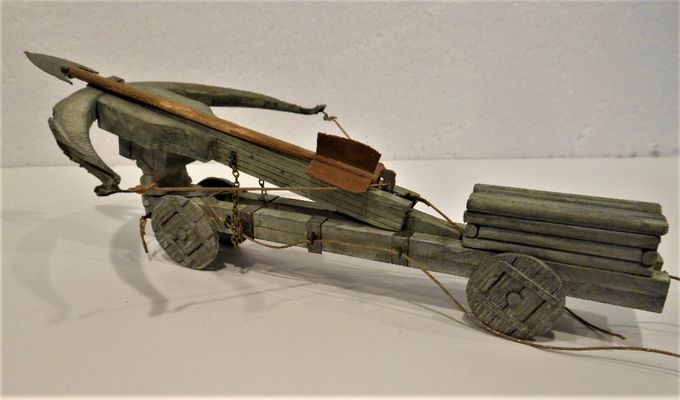 Photo of the yet to be used crossbow. 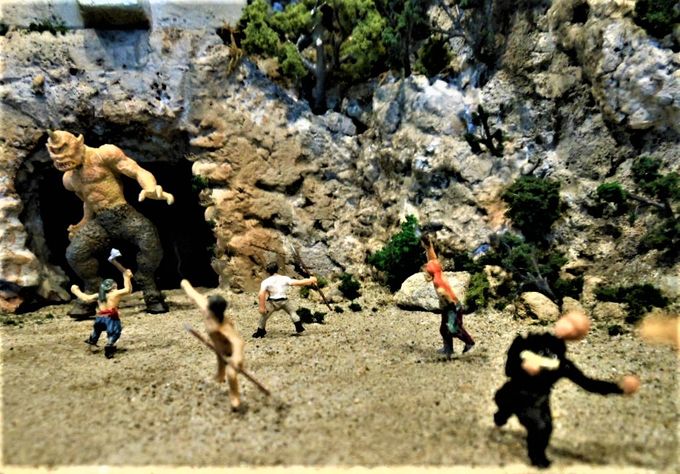 That's Sukorah in the foreground, clutching the magic lamp that is the Mcguffin for the film. 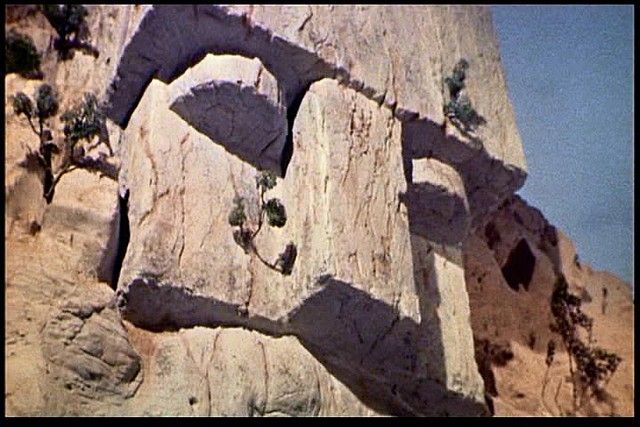 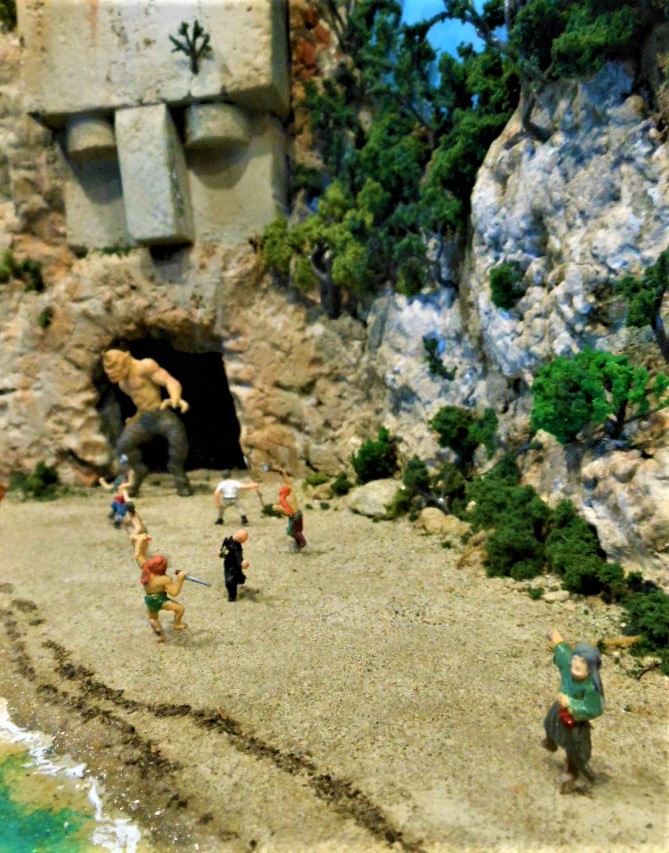 As stated earlier, I had intended to use this diorama with the crossbowbut the scale was all wrong for the cyclops. I based the size of the crossbow on a still I saw from the film that had one of Sinbad's men posed in front of the crossbow next to one of the wheels. Using the figure as a rough ruler, I assumed six feet would be a good reference point but I still had to reduce the crossbow size by 25% which was still too large to fit the scene. Then it came me. You never see the dragon and the crossbow together so I wonder if Harryhausen had the same issue. In any case, I didn't have a dragon in my possession that was even close to the right size but, as they say, all things come to those how wait.

I happened upon a much smaller Sinbad dragon figure on eBay that approximated the size of the X-Plus Cyclops although this dragon (as labeled) wasn't part of the X Plus line from what I could determine. 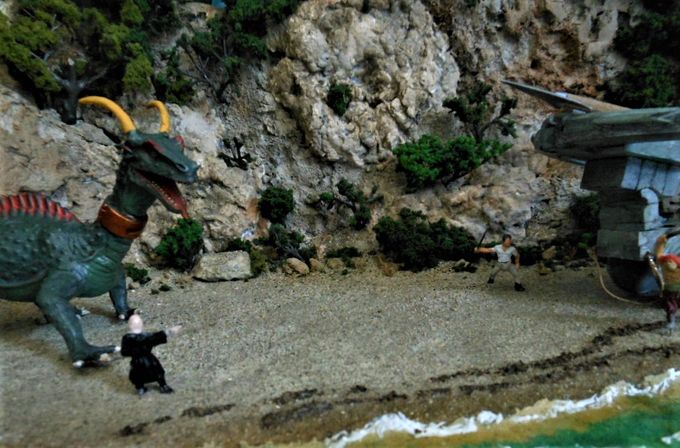 For the photo session, I restaged the figures I already used initially and made another Sukurah pointing at Sinbad's crew as he yells, “Follow! Follow!” just before the crossbow fires. Unfortunately, my diorama was about a foot too short to accommodate both the dragon and the crossbow so I had to hang the end of the crossbow off the end of the scene which was disappointing since I wanted to include the dragon and complete crossbow in one shot. If I decide to reconstruct this diorama one day, I'll be keeping that in mind. 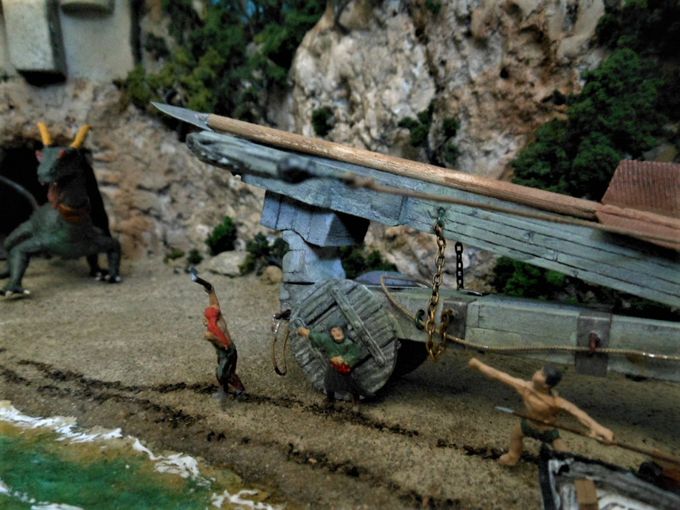 The ampuntbof work you put into this labor of love is very nicely portrayed in the forced perspective of the photo. Well done!

Man this is beautiful and the secrets behind making it make for a riveting read. Wonderful work!

Thanks all of you for the kind words. Sorry for the tardiness of my reply but my "Comments" alert was turned off for some reason and I didn't realize until today (2/5/21) I had any.