When I first started out with this hobby roughly six years ago, I made four dioramas featuring women in the Frank Frazetta style. Believe me when I say I could never hold a candle to that artist but he inspired me to at least give it a shot.

The five scenes I came up with have a number of things in common, namely a voluptuous woman in various stages of undress due to their exotic nature and/or setting. The resin figures are all the same size (roughly 1/12 scale) and were purchased on eBay, mostly from foreign markets.

Since I was just starting out I was a bit timid in making attempts in scenery construction so I happened on the idea of using aquarium decorations as focal points of interest. Since some were generic in terms of scale, they fit right into the scenes I was trying to make. 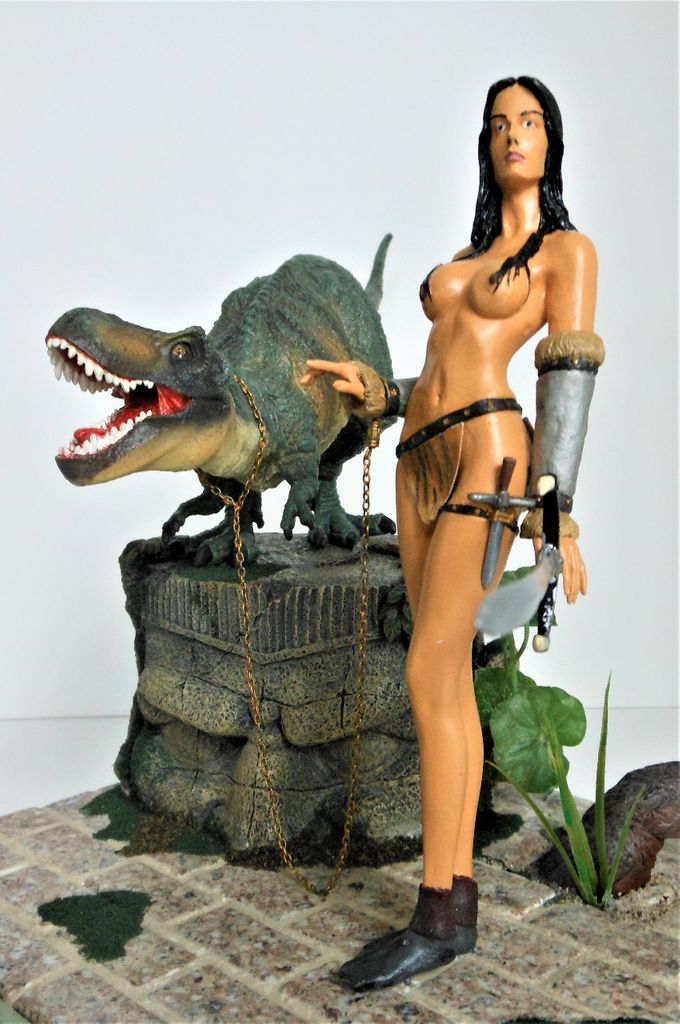 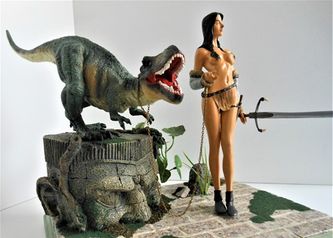 My first scene (which has since been sold) was called “The War Party” had a huntress or warrior princes gazing out across the landscape with a T-Rex chained to her wrist. The dinosaur is perched on a large idol head I cut off to make it seem to be ancient and half buried in the earth. The surrounding foliage was also aquarium decorations (plastic) or a large root (handmade resin) twisting out of the ancient tile. I wanted the scene to be ambiguous so that it wasn't clear who was the master and who was the pet. 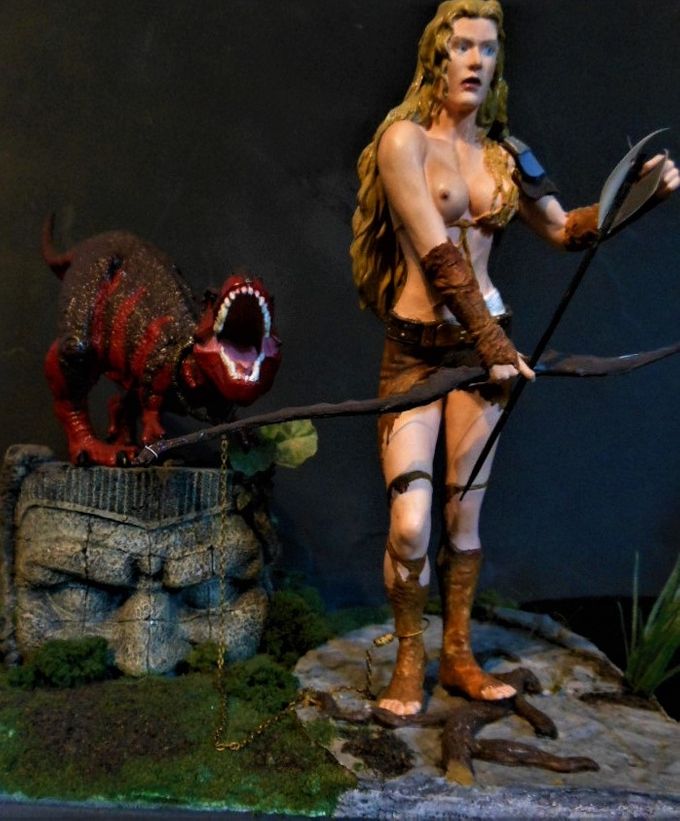 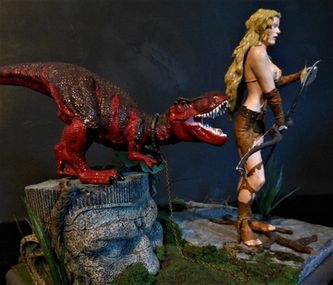 I liked this build so much, I tried it again with a different female figure (an archer this time) and a colorful T-Rex chained to her ankle. It's called “The Pet”. The Rex's red and dark brown color scheme were to get away from the standard gray or green dinosaur colors we are so used to seeing. I used the same idol head but I added a large circular rune stone embedded in the soil that the girl is standing on. 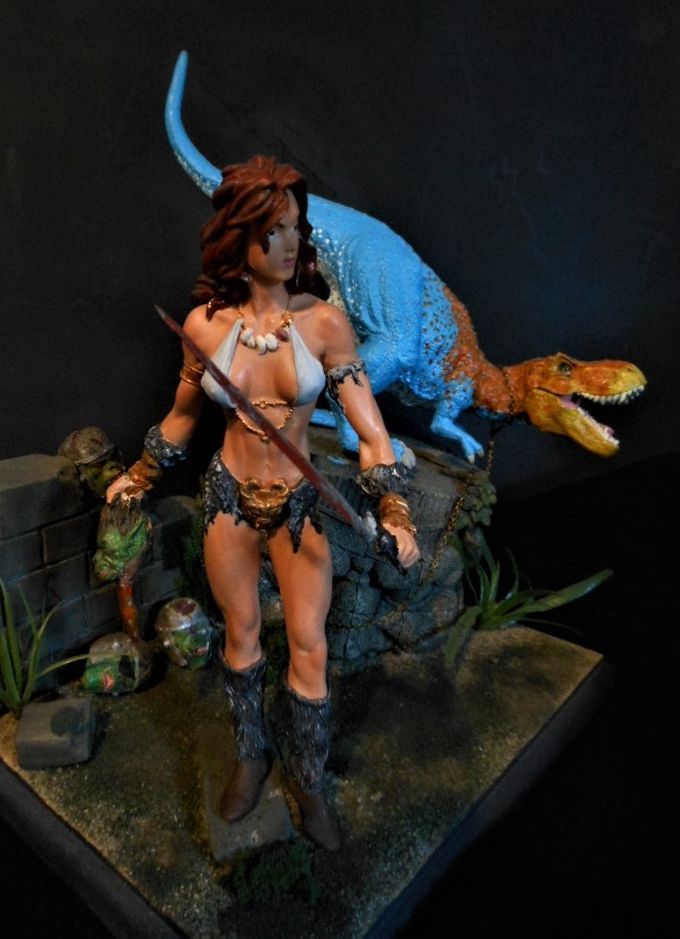 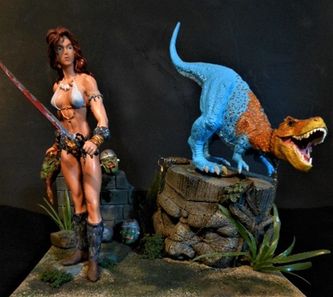 The third scene is almost an anime version of this type of scene with a strong Japanese influence as seen on the girl's appearance. I call this one “The Orc Hunter” and as you can see from the orc heads piled up behind her, she pretty good at it. I got them at a hobby show grab bag so I thought I'd paint them up to add to the scene. The T-Rex in this scene is quite colorful but before you object to the color scheme, I actually found a photo of a lizard with this very same coloration in Nature so it is accurate in that regard. As one can see, I used my good old reliable idol head in this setting but I added a hand carved wall nearby to display the orc heads I mentioned earlier. 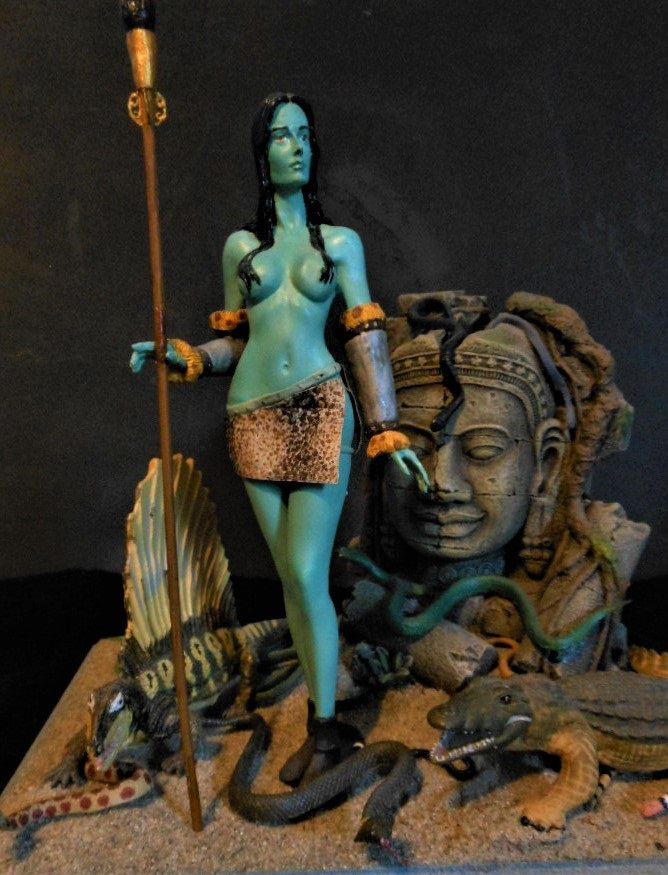 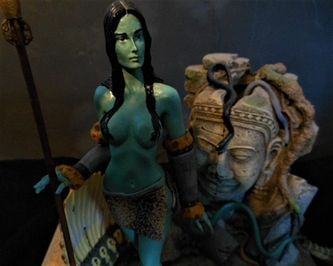 The last scene is called “The Lizard Witch” showing the titular character with her minions swarming about her feet. The female figure is the same as that in my first “Pet” scene but I made her a jade color. I also made a mask (or IS IT???) which can be placed on her face should one desire. I went with a different idol head this time and coated and sealed the base with beach sand. 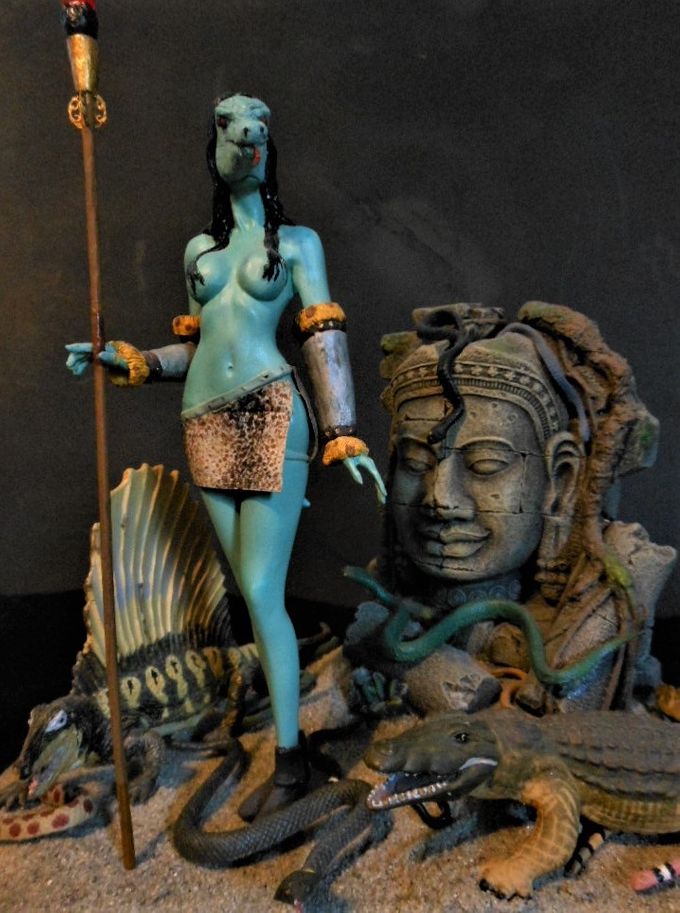 The Lizard Witch in her other form or with just a mask on. You decide. 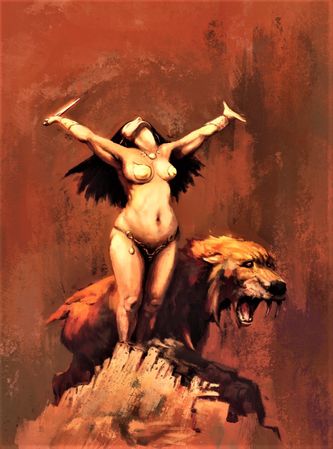 This is the 1975 painting by Frazetta on which this sculpt is based.

Here is a very nice statue I picked on eBay called “Sun Goddess” not too long ago. It came as you see it and is based on a 1975 painting by Frank Frazetta, probably the most influential artist in the world of fantasy art. The sculpt is by Tony Cipriano and the paint job is by Kat Sapene.

This figure is very typical of the way Frazetta portrayed women in his art which may explain his appeal to men of all ages. It had a particularly impact on me as a sixteen year old after seeing Frank's work for the first time on cover art for magazines such as Creepy and Eerie. I even attempted to copy one of his black and white drawings from one of those mags but it is very crude (and cruddy) to say the least. 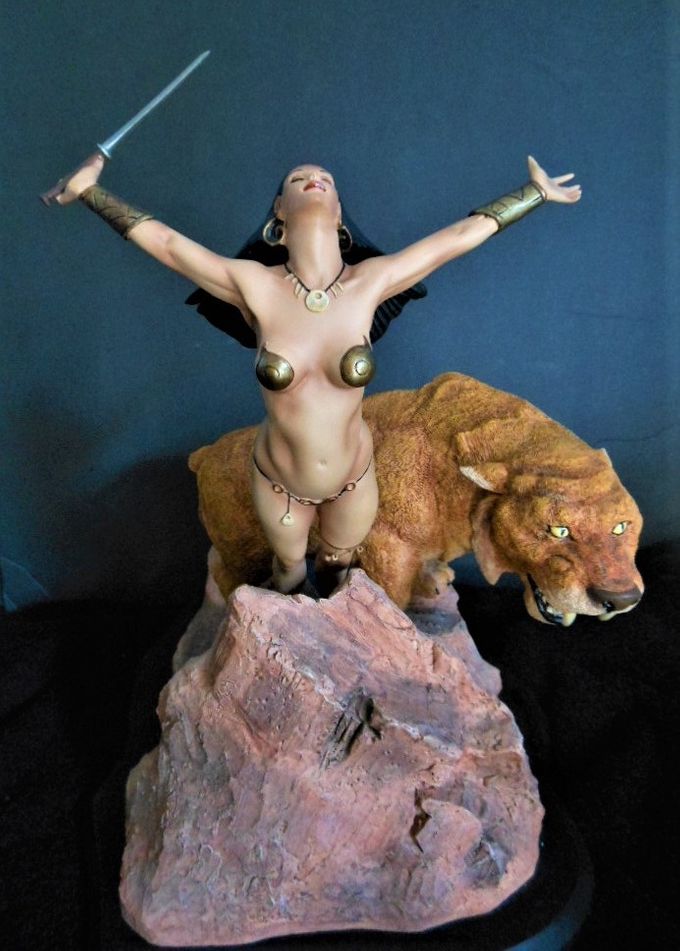 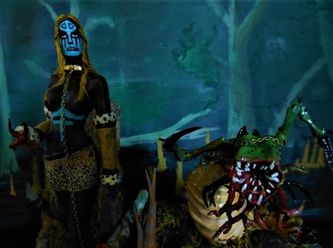 Here's a build I just completed based (somewhat) on a scene from HP Lovecraft's short horror story, "The Call Of Cthulhu", the tale that literally started it all. If she looks familiar, she is. I have used this particular resin kit for a number of my scenes, most of which you can see on this page. If you'd like to read more about this particular lady, click on this link: 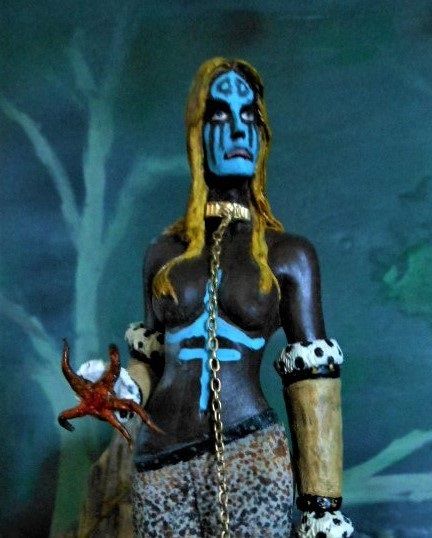