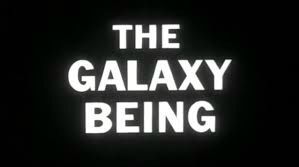 This was the premier episode of the Outer Limit series airing on September 16, 1963. It starred Cliff Robertson (who had just played JFK in “PT 109”), the story was a bit dull in my opinion. It tells of a radio station engineer (Robertson) who, by boosting the power to the radio station antenna with some scifictiony looking gadgets, manages to make contact with a being from another galaxy. Speed of light limitations put aside, they begin a intergalactic Q & A session about each of their worlds and societies. Soon things go wrong (as they always do) and the creature or Galaxy Being is literally sucked through space, ending up here on Earth. For a more complete plot outline, click this link:

The show's only real plus is the Galaxy Being itself, emitting a almost blinding light across its surface along with its mouthless face and glaring eyes, it was pretty creepy stuff. Odd looking black shapes seemed to ooze across its 'skin' adding to the other worldly effect. I later learned that this effect was accomplished by making the alien suit out of a black scuba diving suit. Once the actor donned the skin tight suit along with the face & head appliances, the entire suit was smeared with an oily makeup that would reflect the studio lights. Once the staging was completed (Robertson and the Galaxy Being were never actually in a shot together), a negative image was generated and optically merged to create the scene with the two interacting.

This resin kit is one of many made by Dimensional Designs who has exclusive licensing from Metro-Goldwyn-Mayer to manufacture the Outer Limits characters. Unfortunately, as certain figures sell out, they are not being replaced, leaving many gaps in a future Outer Limits enthusiasts collection. I purchased those that I was still interested and were obviously still available. Unfortunately, Dimensional Designs has a poor track record (in my experience at least) on the communication front since they don't like responding to emails (I sent three with no reply).

Here is the link to Dimensional Designs Outer Limits page to check out their stuff. They also have many other kits relating to the sci-fi world.:

Anyway, the resin kit is pretty straightforward with only five parts, one of which is the base. I was struggling with a way to simulate the oozing light effect on the creature's skin but I couldn't really come up with anything that was practical. I finally settled on painting the Galaxy Being with several coats of iridescent pearl white acrylic paint using a good old paint brush. Once the paint had cured, I hit it with a few coats of gloss clear paint from a rattle can.

I ended up altering the base because it wasn't very interesting, just a flat slab of resin with a raised copyright logo at the front. I just ended up scoring some lines in a grid pattern to simulate floor tiles and painted it accordingly. 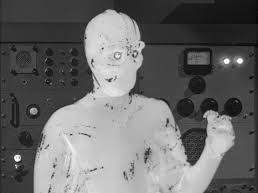 The Galaxy Being it his/its glowing glory.

Here is my feeble attempt at making the glowing effect by painting the figure with pearl white iridescent paint and about ten coats of clear gloss paint from a rattle can.