King Kong - The Eighth Wonder Of The World! 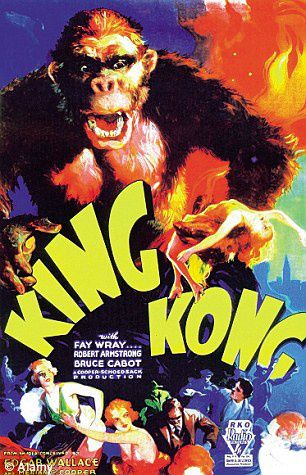 Not too long ago, a local cinema had a free movie day on Tuesday mornings, mostly showing classic films of the 30's and 40's such as 'Casablanca' and 'The Grapes Of Wrath'. Anyway, I recently went to see the original King Kong (probably for the 25th time) since, until then, I had never seen it on the big screen.

I must say, for a film that is 82 (82!!!!!) years old (at this writing) it still holds up. Ya, some of the dialogue is dated (a Carl Denham quote: "What happens when a hard boiled egg sees Beauty? He cracks up and goes sappy, that's what!"). Boy, they don't write lines like that anymore (and perhaps that is for for the better).  Anyway, what got me thinking was how influential this movie really was as indicated by its #41 ranking in the American Film Institutes top 100 films of all time.

Ray Harryhausen, perhaps the best stop motion animator ever, saw this film as a teen and was so influenced by it, he sought out its creator (Willis O'Brien), landed a job, ending up making some of the best stop motion sci-fi and fantasy films of the 50's & 60's. He, in turn, inspired the likes of Steven Spielberg, George Lucas and others, not to mention the multitude of special effects technicians that provide us with many of the films we enjoy so much today.

Getting back to 'Kong', some of you who perhaps saw this film as little kids on TV, hadn't actually seen the complete film. The version relegated to Saturday afternoon television was heavily edited due to its pretty violent content: Natives being crushed or chewed up (in close up), a woman is nonchalantly dropped to her death when Kong realizes that he's grabbed the wrong girl as we watch her plummet twenty stories to the streets below and so on.

The exciting fight with the T-Rex as Kong protects his newest prize, is easily one of the greatest animated scenes in film history. And, amazingly, you actually feel sad when Kong, shot to pieces by the out of reach biplanes, plummets to his death from atop the Empire State building.

Many have tried to remake this classic and have failed miserably. The latest (and most disappointing, to me at least), was Peter Jackson's 2005 version. I mean, Jack Black in the role of Carl Denham? JACK BLACK?!?!?. The mind reels and the stomach hurls. Poor casting aside, technically the film was very well done but it still felt 'cold' somehow, maybe do to some subliminal effect of CGI on my psyche because I had no real sympathy for its Kong.

But, I digress. The purpose of this section is to display some of the King Kong kits that are out there; some great, others not so much. As I build more Kong related kits, I'll continue to add them but the amount is certainly in the dozens so I expect to miss most of them. Hopefully, some of the more obscure kits will show up from time to time on eBay (or elsewhere) so your favorite may also appear in this section one day. (7/15/15) 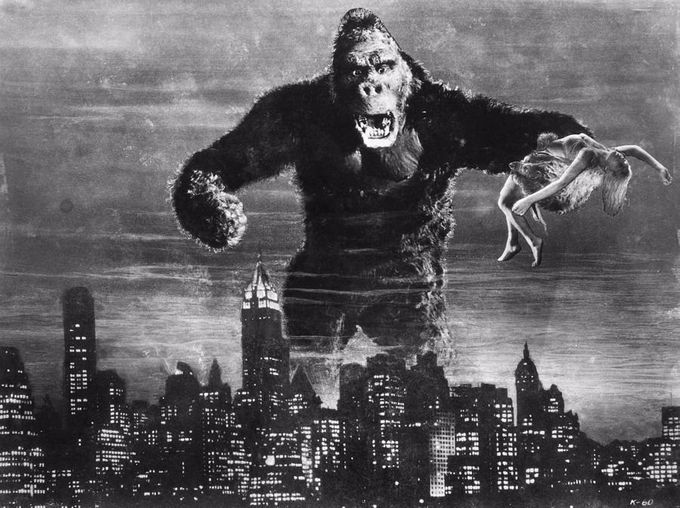 1960's poster art from the classic film that I had hanging in my bedroom during my teens & twenties. Sad, I know. 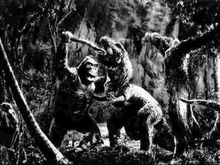 Kong fighting the T-Rex. See the model of this fight in the Kong area click this text.

Kong tangling with the pteranodon on his mountain overlook above Skull Island. Click this text to proceed to that page.

Click once to enlarge pictureThere is a kit of this scene out there but it is very hard to find. I also made my version called "Precipice Encounter" which you can find in the Kong area. 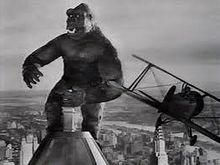 Kong's certain doom in the form of bi-planes. See the "Bronze Kong" model kit showing a version of this scene in the Kong area.