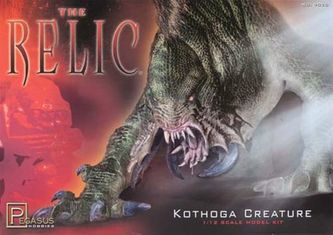 Here's another very nice kit by Moebious displaying the terrible Kothoga monster from the 1997 film "The Relic" based on the book of the same name. The movie is pretty good and has a shocking beheading scene but it suffers from being so damn dark (lighting wise) that you have a hard time making out what the hell is going on. I had hoped the DVD or Bluray releases would have fixed this but it isn't much better I'm afraid.

Anyway, this kit goes together very well and the parts are so snug you could assemble it with using any glue. I don't have an air brush so the paint job was done by hand but I think it came out pretty well. As I generally do, I used some of the movie's poster art for the name plate since I didn't care for the kit's sign. They also include an out of scale stone idol of the monster (as shown in the film) but I don't display it because it really didn't add to the scene.

The picture above is the box art. A slide show of my build is below.