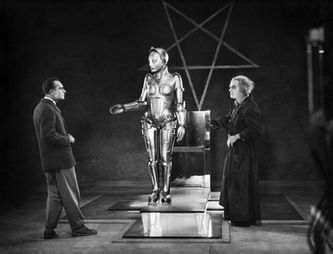 This section, as the title suggests, is devoted to that science fiction icon, the robot. The term 'robot' is from a Czechoslovakian word meaning slave and was first used in the 1920's play titled R.U.R by the Czech writer, Karel Capek.

Although most think of robots in terms as being a staple of sci-fi cinema, robots are pretty rare in the movie world up until 'Star Wars' (1977) which practically had a whole universe populated with them. Putting aside the movie serials of the forties where robots were usually 'helpers' for the mad scientists in those pot boilers, I can only think of a handful of films that actually had true robots in them, namely 'Metropolis' (1927 - above), 'GOG' (1954), 'Target: Earth', (1954) Forbidden Planet, (1956) and Kronos' (1957). Realize that when I use the term 'robot', I am thinking of a purely electro-mechanical object, not some amalgam of flesh & steel such as a cyborg (think the Terminator.).

Aside from GOG, most of these mechanical wonders were merely men in ill fitting suits with Forbidden Planet's Robbie the Robot being a notable exception. Kronos was actually a giant robot/storage battery (mostly a cartoon on the screen) crashing its way through Mexico sucking up Earth's electrical power to transmit it back to its energy starved home world.