B Movies I Have Known & Loved

This section is devoted to the seemingly endless & cheaper type of movies from the 50's and early 60's known as the 'B' film. Once upon a time, on a Saturday afternoon, you could go to the cinema and see two movies, a couple cartoons and perhaps a newsreel for less than 50 cents (honest). The second or 'B'  feature wasn't what you initially had gone to see but sometimes it turned out to be better than the feature film.

Science fiction and horror films were notorious for this phenomena and though the budgets were miniscle by today's standards, I hold a special place in heart for these crappy little films that I still remember to this day. Some had titles that evoked mental images that ranged from the wonderful to the absurd such as "Fiend Without A Face" (a personal fav) or "I Married A Monster From Outer Space", a surprisingly good film.

Anyway, I've collected and built a number of  kits of this special sub-group of films that you may enjoy. I should mention that what I think of as being a 'B' film may not jibe with yours but I think we can agree we love watching them. 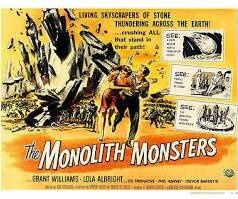