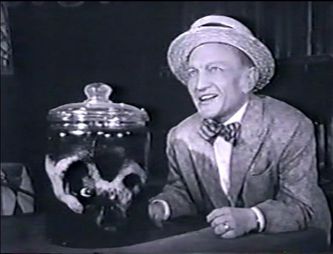 Screenshot of the Alfred Hitchcock version of the story. That's Billy Barty posing with the jar in the 1964 episode.

“The Jar” is a macabre short story by Ray Bradbury which concerns a country bumpkin at carnival sideshow who sees an indescribable thing (very Lovecraftian that) floating in a jar. So taken in is he with the jar and its contents, he persuades one of the carnival workers to sell to him. When he returns home, he and the jar become the center of attention in the small community, a status, up until now, has eluded him.

Curiously, everyone that looks into the jar sees something different and/or it stirs some memories of their past which still haunt them. I won't spoil the ending for you but you can see two TV versions of the story on YouTube (the Alfred Hitchcock version is the best) or you can read the story to see how it turns out. Here's a link to the Hitchcock version:

Anyway, I first saw this story on the Alfred Hitchcock Hour when I was a mere lad of 14. There was a very creepy element about the story that always stayed with me and a chance reviewing of the episode inspired me to try my hand at reconstructing “The Jar”. The hardest part was to find a jar suitable to set up to duplicate the scene full scale. I had considered making a half or third size version but I found a two gallon specimen jar that suited my needs perfectly on eBay (where else?).

The jar's contents (sans liquid) started out has a life size Styrofoam manikin head I that I purchased at Hobby Lobby. As it turned out, I ended up distorting the head so severely, a simple ball of foam would have been adequate and less expensive. 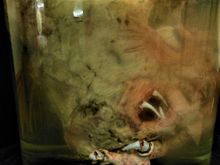 Detail shot of the left side. Click for a larger image.

Nice artwork based on the short story by Ray Bradbury. 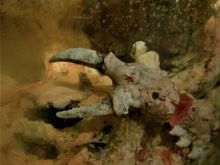 Detail shot of the right side. Click for a larger image. 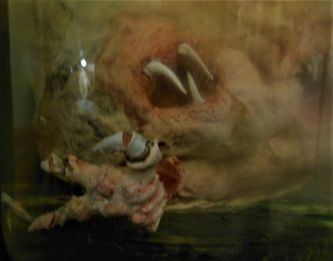 Probably about as close you'd want to get with The Jar!

I printed out several screen shots I had from the original TV program as a reference points for the thing's appearance though I soon departed and chose my own look which was a bit more grotesque. I went into my stash of scrap plastic and failed 3D prints which proved to be more helpful than I had anticipated. Unlike the original arm less version, I added a pair of stubby clawed arms and other stuff to confuse any sense of familiarity by the viewer. The eye was a ball of two part epoxy into which I mounted an albino iris I found eBay. The teeth in one mouth are actually flat tooth picks and the mouth with three teeth are actually shark teeth and do bear some resemblance to the Hitchcock version. For general surface alterations I used SculptaMold, two part epoxy clay and Liquitex molding paste.

I used gray yak hair for, well, hair that I secured with latex.

The overall paint job was purposely blotchy with various shades of flesh, dark browns & black to accent some of the features and confuse the eye with the rest.

The final step was to immerse the thing in some sort of liquid to match the story. Water was out simply because a couple reasons, one being it would probably evaporate overtime and if that didn't happen, it would eventually get foul after a time.

My next choice was to use a clear casting epoxy which seemed like a good idea at the time. I managed to find a relatively inexpensive two part epoxy used to clear coat bars and the like. Unfortunately, the curing process generated an unacceptable amount of heat on a test pour of about one inch in thickness. This would be a problem in my mind since I feared it would melt the Styrofoam core of the object along with the 3D parts and ruin all my work. 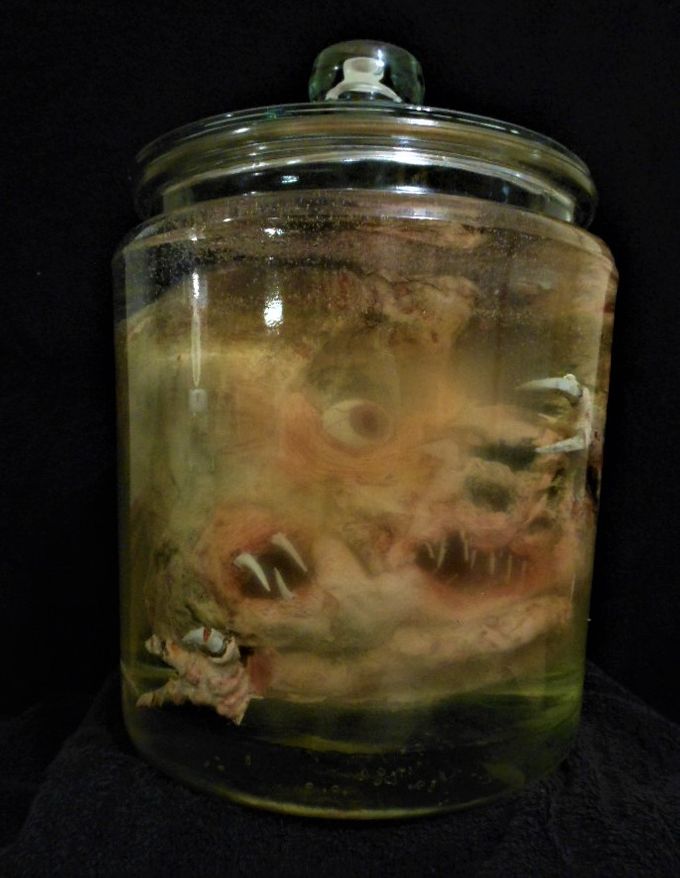 After a bit of head scratching and Google searches (Google, ya gotta love it!), I came across a clear wax gel product on Etsy. Although a bit expensive (five pounds for about fifty bucks plus shipping), I ordered it, hoping five pounds would be enough to fill the jar. As it turned out, I ended up purchasing an additional seven pounds to fill the jar, using a total of twelve pounds resulting in a pretty heavy & bulky display but it was for art's sake, so what the heck. We all know how Art can get, don't we?

My main problem with this wax was it was prone to bubble entrainment. The thing in the jar wasn't water tight so as the wax was absorbed into it, it produced a lot of micro-bubbles which became suspended as the wax hardened. I ended up putting the whole jar into the oven once the pouring was completed and heating it to 200o F. This melted the wax and allowed the bubbles to rise to the surface, a process that took about four hours NOT counting the heat up and cool down times. 11/13/20 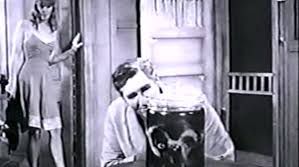 A still from Hitchcock episode "The Jar" showing two of the main characters, Pat Buttram (yep, that's Mr. Haney from "Green Acres") and Collin Wilcox Patton (from "To Kill A Mockingbird") as his unfaithful wife. Why do country bumpkins always end up with such hot wives? The same thing happened in "Attack Of The Giant Leeches" with Yvette Vickers.

Excellent!!! Great description of your carnival jar. Thanks for your detailing of it. Very interesting!!

You're very welcome, Georgia. I'm happy that you enjoyed your visit and hope to 'see' you again.