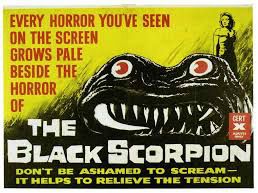 Here is a recent model I've built based on the 1957 monster bug movie "The Black Scorpion". The story takes place in Mexico where, after an earthquake & volcanic eruption, a fissure opens in the earth releasing the title character. As is the case with most of these types of films, a few minor characters are dispatched until the giant scorpion makes it grand appearance and then is finally thwarted by the good guys. This film is no different.

Why I like this film is that it has some fair stop motion animation credited to Willis O'Brien, the man who brought us the original 1933 "King Kong". Though he may have had a hand is the film's scenes and development, the actual animation was apparently done by others. Some sequences are quite good like the exploration of the massive cavern in which the black scorpion and dozens of others exist, presumably since prehistoric times. This scene also has a giant trap door spider and some interesting looking worm things that the scorpions feed on. Another nice scene is the night attack on a passenger train by a horde of the hungry aracnids, reminiscent of the elevated train attack in the original King Kong.

Alas, the film suffers from a limited budget which begins to show as it reaches its conclusion with poor repeat footage of a scorpion silhouette marching through Mexico City as it is being lured to its doom. The final battle scene in the stadium with tanks and helicopters isn't that engaging considering all that is going on. There were numerous jumps shots, showing close ups of the leering, drooling monster which had unconvincing 'human' features (see poster above for an example).

Anyway, this resin kit is another of Joe Laudati's recent efforts. The original kit had the giant scorpion with a tank in its claws raised as if to dash it to the ground. As is my nature, I thought I'd add a little more excitement to the scene by adding another tank, some soldiers and a helicopter snagged in mid flight by the monster. The original base was too small for all this so I ended up using a base from another Joe Laudati kit “20 Million Miles To Earth” featuring the Ymir & elephant battle (which can be seen in the Harryhausen Tribute Page elsewhere on this site).

Although the film's story takes place in Mexico, I was forced to use the US military to battle the beast since Mexican military figures and vehicles are all but non-existent in the hobby world. The tanks and chopper are, however, authentic for the period in which the film takes place. The chopper model is an Italeri 1/72 scale UH-34J Sea Horse 1066S you may find on eBay for around $18.00

On a side note, “The Black Scorpion” was one of many giant bug movies of this period, most shot in black and white usually on a shoe string budget. Some that come to mind are “THEM!” (giant ants and still the best of them all), “Tarantula” (a giant spider. Look for Clint Eastwood as a fighter pilot at the film's conclusion), “The Deadly Mantis” (a giant praying mantis), “Beginning Of The End” (giant grasshoppers, probably the cheesiest of the bunch. One scene supposedly has the giant hoppers walking up the side of a sky scraper. Look close and you can see one walk off the photo into the 'air'), “Earth vs The Spider” (yet another one) and the British “The Cosmic Monsters” (giant bugs of all species). I'm sure I may have missed one or two but you get the idea. The late 50's was the peak of the giant bug craze as yet to be surpassed.

Concerning the leading ladies in the gigantic creature genre, I thiink Mara Corday may have the record for being in most of them. She co-starred in "The Black Scorpion" with Richard Denning, another sci-fi B actor guy, "Tarantula" with Leo J. Carroll (of TV's  "Topper" and "Man From U.N.C.L.E.") and "The Giant Claw" with another B film staple, Jeff Morrow. She made numerous other films throughout the 60's & 70's, mostly Westerns. She also bared all (almost) as one of the original Playboy Bunnies and, at this writing, is still with us at the tender age of 86. 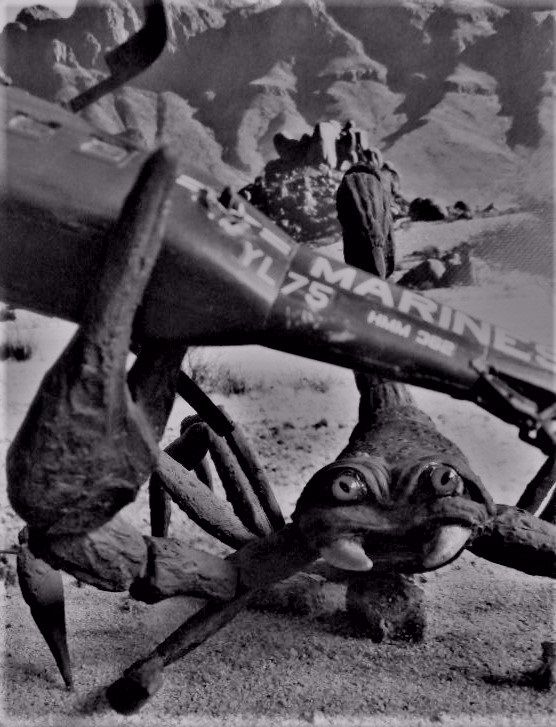 Using my photo editor, I made a black and white shot of the battle to resemble footage in the actual film. My scene is in the desert whereas the battle with the Mexican army towards the end of the film took place in a sports colosseum. 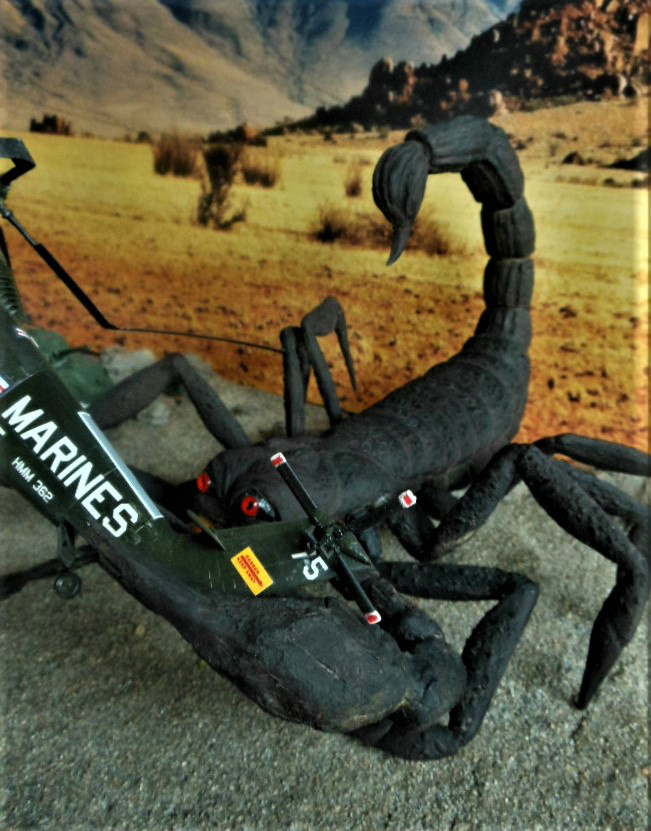 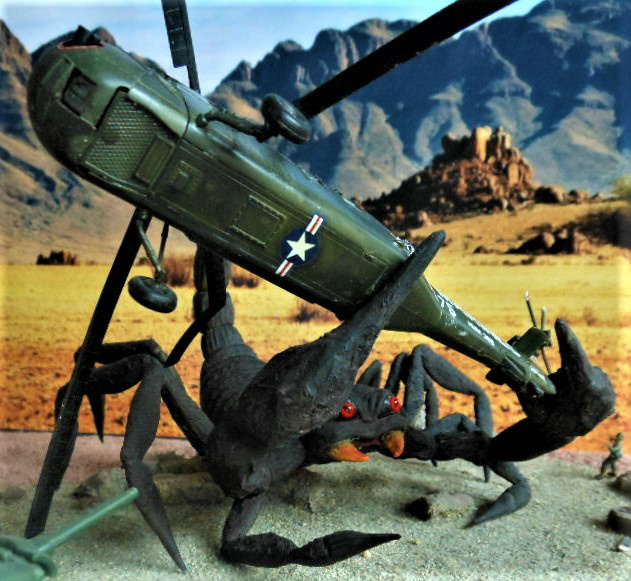 What is the make & model of the helicopter shown in the film and the one shown here?